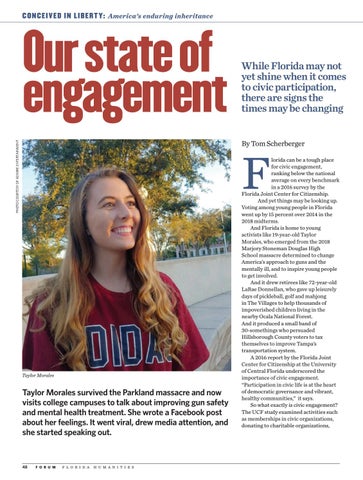 Our state of engagement

While Florida may not yet shine when it comes to civic participation, there are signs the times may be changing

Taylor Morales survived the Parkland massacre and now visits college campuses to talk about improving gun safety and mental health treatment. She wrote a Facebook post about her feelings. It went viral, drew media attention, and she started speaking out.

lorida can be a tough place for civic engagement, ranking below the national average on every benchmark in a 2016 survey by the Florida Joint Center for Citizenship. And yet things may be looking up. Voting among young people in Florida went up by 15 percent over 2014 in the 2018 midterms. And Florida is home to young activists like 19-year-old Taylor Morales, who emerged from the 2018 Marjory Stoneman Douglas High School massacre determined to change America’s approach to guns and the mentally ill, and to inspire young people to get involved. And it drew retirees like 72-year-old LaRae Donnellan, who gave up leisurely days of pickleball, golf and mahjong in The Villages to help thousands of impoverished children living in the nearby Ocala National Forest. And it produced a small band of 30-somethings who persuaded Hillsborough County voters to tax themselves to improve Tampa’s transportation system. A 2016 report by the Florida Joint Center for Citizenship at the University of Central Florida underscored the importance of civic engagement. “Participation in civic life is at the heart of democratic governance and vibrant, healthy communities,” it says. So what exactly is civic engagement? The UCF study examined activities such as memberships in civic organizations, donating to charitable organizations,