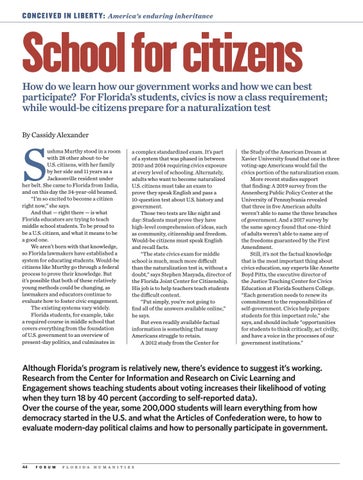 How do we learn how our government works and how we can best participate? For Florida’s students, civics is now a class requirement; while would-be citizens prepare for a naturalization test

By Cassidy Alexander ushma Murthy stood in a room with 28 other about-to-be U.S. citizens, with her family by her side and 11 years as a Jacksonville resident under her belt. She came to Florida from India, and on this day the 34-year-old beamed. “I’m so excited to become a citizen right now,” she says. And that — right there — is what Florida educators are trying to teach middle school students. To be proud to be a U.S. citizen, and what it means to be a good one. We aren’t born with that knowledge, so Florida lawmakers have established a system for educating students. Would-be citizens like Murthy go through a federal process to prove their knowledge. But it’s possible that both of these relatively young methods could be changing, as lawmakers and educators continue to evaluate how to foster civic engagement. The existing systems vary widely. Florida students, for example, take a required course in middle school that covers everything from the foundation of U.S. government to an overview of present-day politics, and culminates in

a complex standardized exam. It’s part of a system that was phased in between 2010 and 2014 requiring civics exposure at every level of schooling. Alternately, adults who want to become naturalized U.S. citizens must take an exam to prove they speak English and pass a 10-question test about U.S. history and government. Those two tests are like night and day: Students must prove they have high-level comprehension of ideas, such as community, citizenship and freedom. Would-be citizens must speak English and recall facts. “The state civics exam for middle school is much, much more difficult than the naturalization test is, without a doubt,” says Stephen Masyada, director of the Florida Joint Center for Citizenship. His job is to help teachers teach students the difficult content. “Put simply, you’re not going to find all of the answers available online,” he says. But even readily available factual information is something that many Americans struggle to retain. A 2012 study from the Center for

the Study of the American Dream at Xavier University found that one in three voting-age Americans would fail the civics portion of the naturalization exam. More recent studies support that finding: A 2019 survey from the Annenberg Public Policy Center at the University of Pennsylvania revealed that three in five American adults weren’t able to name the three branches of government. And a 2017 survey by the same agency found that one-third of adults weren’t able to name any of the freedoms guaranteed by the First Amendment. Still, it’s not the factual knowledge that is the most important thing about civics education, say experts like Annette Boyd Pitts, the executive director of the Justice Teaching Center for Civics Education at Florida Southern College. “Each generation needs to renew its commitment to the responsibilities of self-government. Civics help prepare students for this important role,” she says, and should include “opportunities for students to think critically, act civilly, and have a voice in the processes of our government institutions.”

Although Florida’s program is relatively new, there’s evidence to suggest it’s working. Research from the Center for Information and Research on Civic Learning and Engagement shows teaching students about voting increases their likelihood of voting when they turn 18 by 40 percent (according to self-reported data). Over the course of the year, some 200,000 students will learn everything from how democracy started in the U.S. and what the Articles of Confederation were, to how to evaluate modern-day political claims and how to personally participate in government.