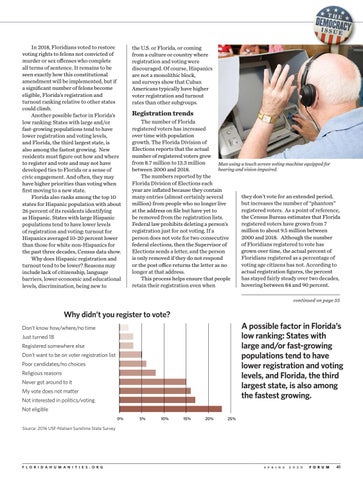 In 2018, Floridians voted to restore voting rights to felons not convicted of murder or sex offenses who complete all terms of sentence. It remains to be seen exactly how this constitutional amendment will be implemented, but if a significant number of felons become eligible, Florida’s registration and turnout ranking relative to other states could climb. Another possible factor in Florida’s low ranking: States with large and/or fast-growing populations tend to have lower registration and voting levels, and Florida, the third largest state, is also among the fastest growing. New residents must figure out how and where to register and vote and may not have developed ties to Florida or a sense of civic engagement. And often, they may have higher priorities than voting when first moving to a new state. Florida also ranks among the top 10 states for Hispanic population with about 26 percent of its residents identifying as Hispanic. States with large Hispanic populations tend to have lower levels of registration and voting: turnout for Hispanics averaged 10-20 percent lower than those for white non-Hispanics for the past three decades, Census data show. Why does Hispanic registration and turnout tend to be lower? Reasons may include lack of citizenship, language barriers, lower economic and educational levels, discrimination, being new to

the U.S. or Florida, or coming from a culture or country where registration and voting were discouraged. Of course, Hispanics are not a monolithic block, and surveys show that Cuban Americans typically have higher voter registration and turnout rates than other subgroups.

The number of Florida registered voters has increased over time with population growth. The Florida Division of Elections reports that the actual number of registered voters grew from 8.7 million to 13.3 million Man using a touch screen voting machine equipped for hearing and vision impaired. between 2000 and 2018. The numbers reported by the Florida Division of Elections each year are inflated because they contain they don’t vote for an extended period, many entries (almost certainly several but increases the number of “phantom” million) from people who no longer live registered voters. As a point of reference, at the address on file but have yet to the Census Bureau estimates that Florida be removed from the registration lists. registered voters have grown from 7 Federal law prohibits deleting a person’s million to about 9.5 million between registration just for not voting. If a 2000 and 2018. Although the number person does not vote for two consecutive of Floridians registered to vote has federal elections, then the Supervisor of grown over time, the actual percent of Elections sends a letter, and the person Floridians registered as a percentage of is only removed if they do not respond voting age citizens has not. According to or the post office returns the letter as no actual registration figures, the percent longer at that address. has stayed fairly steady over two decades, This process helps ensure that people hovering between 84 and 90 percent. retain their registration even when continued on page 55

A possible factor in Florida’s low ranking: States with large and/or fast-growing populations tend to have lower registration and voting levels, and Florida, the third largest state, is also among the fastest growing.