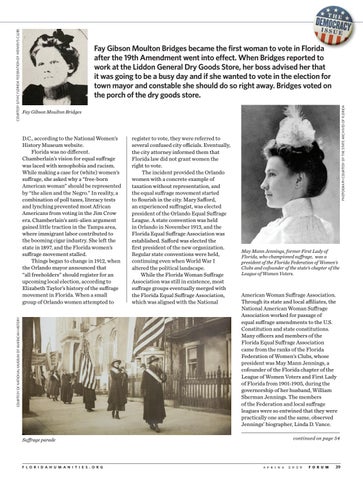 Fay Gibson Moulton Bridges became the first woman to vote in Florida after the 19th Amendment went into effect. When Bridges reported to work at the Liddon General Dry Goods Store, her boss advised her that it was going to be a busy day and if she wanted to vote in the election for town mayor and constable she should do so right away. Bridges voted on the porch of the dry goods store. Fay Gibson Moulton Bridges

D.C., according to the National Women’s History Museum website. Florida was no different. Chamberlain’s vision for equal suffrage was laced with xenophobia and racism. While making a case for (white) women’s suffrage, she asked why a “free-born American woman” should be represented by “the alien and the Negro.” In reality, a combination of poll taxes, literacy tests and lynching prevented most African Americans from voting in the Jim Crow era. Chamberlain’s anti-alien argument gained little traction in the Tampa area, where immigrant labor contributed to the booming cigar industry. She left the state in 1897, and the Florida women’s suffrage movement stalled. Things began to change in 1912, when the Orlando mayor announced that “all freeholders” should register for an upcoming local election, according to Elizabeth Taylor’s history of the suffrage movement in Florida. When a small group of Orlando women attempted to

register to vote, they were referred to several confused city officials. Eventually, the city attorney informed them that Florida law did not grant women the right to vote. The incident provided the Orlando women with a concrete example of taxation without representation, and the equal suffrage movement started to flourish in the city. Mary Safford, an experienced suffragist, was elected president of the Orlando Equal Suffrage League. A state convention was held in Orlando in November 1913, and the Florida Equal Suffrage Association was established. Safford was elected the first president of the new organization. Regular state conventions were held, continuing even when World War I altered the political landscape. While the Florida Woman Suffrage Association was still in existence, most suffrage groups eventually merged with the Florida Equal Suffrage Association, which was aligned with the National

May Mann Jennings, former First Lady of Florida, who championed suffrage, was a president of the Florida Federation of Women’s Clubs and cofounder of the state’s chapter of the League of Women Voters.

American Woman Suffrage Association. Through its state and local affiliates, the National American Woman Suffrage Association worked for passage of equal suffrage amendments to the U.S. Constitution and state constitutions. Many officers and members of the Florida Equal Suffrage Association came from the ranks of the Florida Federation of Women’s Clubs, whose president was May Mann Jennings, a cofounder of the Florida chapter of the League of Women Voters and First Lady of Florida from 1901-1905, during the governorship of her husband, William Sherman Jennings. The members of the Federation and local suffrage leagues were so entwined that they were practically one and the same, observed Jennings’ biographer, Linda D. Vance. continued on page 54