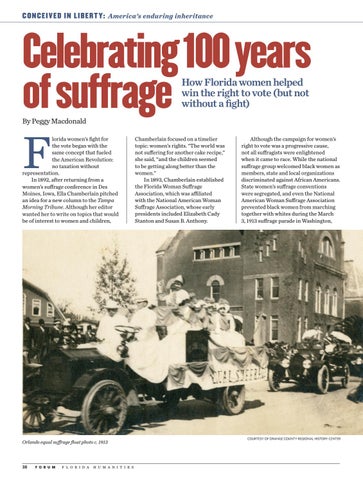 lorida women’s fight for the vote began with the same concept that fueled the American Revolution: no taxation without representation. In 1892, after returning from a women’s suffrage conference in Des Moines, Iowa, Ella Chamberlain pitched an idea for a new column to the Tampa Morning Tribune. Although her editor wanted her to write on topics that would be of interest to women and children,

Chamberlain focused on a timelier topic: women’s rights. “The world was not suffering for another cake recipe,” she said, “and the children seemed to be getting along better than the women.” In 1893, Chamberlain established the Florida Woman Suffrage Association, which was affiliated with the National American Woman Suffrage Association, whose early presidents included Elizabeth Cady Stanton and Susan B. Anthony.

Although the campaign for women’s right to vote was a progressive cause, not all suffragists were enlightened when it came to race. While the national suffrage group welcomed black women as members, state and local organizations discriminated against African Americans. State women’s suffrage conventions were segregated, and even the National American Woman Suffrage Association prevented black women from marching together with whites during the March 3, 1913 suffrage parade in Washington,