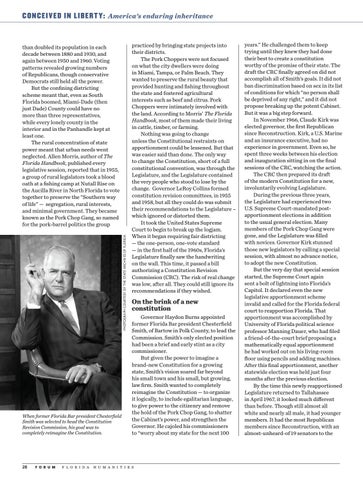 than doubled its population in each decade between 1880 and 1930, and again between 1950 and 1960. Voting patterns revealed growing numbers of Republicans, though conservative Democrats still held all the power. But the confining districting scheme meant that, even as South Florida boomed, Miami-Dade (then just Dade) County could have no more than three representatives, while every lonely county in the interior and in the Panhandle kept at least one. The rural concentration of state power meant that urban needs went neglected. Allen Morris, author of The Florida Handbook, published every legislative session, reported that in 1955, a group of rural legislators took a blood oath at a fishing camp at Nutall Rise on the Aucilla River in North Florida to vote together to preserve the “Southern way of life” — segregation, rural interests, and minimal government. They became known as the Pork Chop Gang, so named for the pork-barrel politics the group

practiced by bringing state projects into their districts. The Pork Choppers were not focused on what the city dwellers were doing in Miami, Tampa, or Palm Beach. They wanted to preserve the rural beauty that provided hunting and fishing throughout the state and fostered agricultural interests such as beef and citrus. Pork Choppers were intimately involved with the land. According to Morris’ The Florida Handbook, most of them made their living in cattle, timber, or farming. Nothing was going to change unless the Constitutional restraints on apportionment could be lessened. But that was easier said than done. The only way to change the Constitution, short of a full constitutional convention, was through the Legislature, and the Legislature contained the very people who stood to lose by the change. Governor LeRoy Collins formed constitution revision committees, in 1955 and 1958, but all they could do was submit their recommendations to the Legislature – which ignored or distorted them. It took the United States Supreme Court to begin to break up the logjam. When it began requiring fair districting — the one-person, one-vote standard — in the first half of the 1960s, Florida’s Legislature finally saw the handwriting on the wall. This time, it passed a bill authorizing a Constitution Revision Commission (CRC). The risk of real change was low, after all. They could still ignore its recommendations if they wished.

On the brink of a new constitution

Governor Haydon Burns appointed former Florida Bar president Chesterfield Smith, of Bartow in Polk County, to lead the Commission. Smith’s only elected position had been a brief and early stint as a city commissioner. But given the power to imagine a brand-new Constitution for a growing state, Smith’s vision soared far beyond his small town and his small, but growing, law firm. Smith wanted to completely reimagine the Constitution — to organize it logically, to include egalitarian language, to give power to the citizenry and remove the hold of the Pork Chop Gang, to shatter the Cabinet’s power, and strengthen the Governor. He cajoled his commissioners to “worry about my state for the next 100

years.” He challenged them to keep trying until they knew they had done their best to create a constitution worthy of the promise of their state. The draft the CRC finally agreed on did not accomplish all of Smith’s goals. It did not ban discrimination based on sex in its list of conditions for which “no person shall be deprived of any right,” and it did not propose breaking up the potent Cabinet. But it was a big step forward. In November 1966, Claude Kirk was elected governor, the first Republican since Reconstruction. Kirk, a U.S. Marine and an insurance executive, had no experience in government. Even so, he spent three weeks between his election and inauguration sitting in on the final sessions of the CRC, watching the action. The CRC then prepared its draft of the modern Constitution for a new, involuntarily evolving Legislature. During the previous three years, the Legislature had experienced two U.S. Supreme Court-mandated postapportionment elections in addition to the usual general election. Many members of the Pork Chop Gang were gone, and the Legislature was filled with novices. Governor Kirk stunned those new legislators by calling a special session, with almost no advance notice, to adopt the new Constitution. But the very day that special session started, the Supreme Court again sent a bolt of lightning into Florida’s Capitol. It declared even the new legislative apportionment scheme invalid and called for the Florida federal court to reapportion Florida. That apportionment was accomplished by University of Florida political science professor Manning Dauer, who had filed a friend-of-the-court brief proposing a mathematically equal apportionment he had worked out on his living-room floor using pencils and adding machines. After this final apportionment, another statewide election was held just four months after the previous election. By the time this newly reapportioned Legislature returned to Tallahassee in April 1967, it looked much different than before. Though still almost all white and nearly all male, it had younger members. It had the most Republican members since Reconstruction, with an almost-unheard-of 19 senators to the