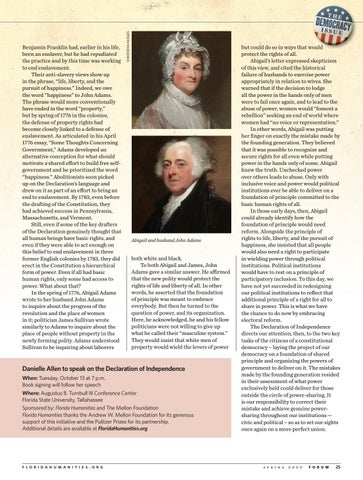 Benjamin Franklin had, earlier in his life, been an enslaver, but he had repudiated the practice and by this time was working to end enslavement. Their anti-slavery views show up in the phrase, “life, liberty, and the pursuit of happiness.” Indeed, we owe the word “happiness” to John Adams. The phrase would more conventionally have ended in the word “property,” but by spring of 1776 in the colonies, the defense of property rights had become closely linked to a defense of enslavement. As articulated in his April 1776 essay, “Some Thoughts Concerning Government,” Adams developed an alternative conception for what should motivate a shared effort to build free selfgovernment and he prioritized the word “happiness.” Abolitionists soon picked up on the Declaration’s language and drew on it as part of an effort to bring an end to enslavement. By 1783, even before the drafting of the Constitution, they had achieved success in Pennsylvania, Massachusetts, and Vermont. Still, even if some of the key drafters of the Declaration genuinely thought that all human beings have basic rights, and even if they were able to act enough on this belief to end enslavement in three former English colonies by 1783, they did erect in the Constitution a hierarchical form of power. Even if all had basic human rights, only some had access to power. What about that? In the spring of 1776, Abigail Adams wrote to her husband John Adams to inquire about the progress of the revolution and the place of women in it; politician James Sullivan wrote similarly to Adams to inquire about the place of people without property in the newly forming polity. Adams understood Sullivan to be inquiring about laborers

both white and black. To both Abigail and James, John Adams gave a similar answer. He affirmed that the new polity would protect the rights of life and liberty of all. In other words, he asserted that the foundation of principle was meant to embrace everybody. But then he turned to the question of power, and its organization. Here, he acknowledged, he and his fellow politicians were not willing to give up what he called their “masculine system.” They would insist that white men of property would wield the levers of power

Danielle Allen to speak on the Declaration of Independence When: Tuesday, October 13 at 7 p.m. Book signing will follow her speech Where: Augustus B. Turnbull III Conference Center Florida State University, Tallahassee Sponsored by: Florida Humanities and The Mellon Foundation Florida Humanities thanks the Andrew W. Mellon Foundation for its generous support of this initiative and the Pulitzer Prizes for its partnership. Additional details are available at FloridaHumanities.org

but could do so in ways that would protect the rights of all. Abigail’s letter expressed skepticism of this view, and cited the historical failure of husbands to exercise power appropriately in relation to wives. She warned that if the decision to lodge all the power in the hands only of men were to fail once again, and to lead to the abuse of power, women would “foment a rebellion” seeking an end of world where women had “no voice or representation.” In other words, Abigail was putting her finger on exactly the mistake made by the founding generation. They believed that it was possible to recognize and secure rights for all even while putting power in the hands only of some. Abigail knew the truth. Unchecked power over others leads to abuse. Only with inclusive voice and power would political institutions ever be able to deliver on a foundation of principle committed to the basic human rights of all. In those early days, then, Abigail could already identify how the foundation of principle would need reform. Alongside the principle of rights to life, liberty, and the pursuit of happiness, she insisted that all people would also need a right to participate in wielding power through political institutions. Political institutions would have to rest on a principle of participatory inclusion. To this day, we have not yet succeeded in redesigning our political institutions to reflect that additional principle of a right for all to share in power. This is what we have the chance to do now by embracing electoral reform. The Declaration of Independence directs our attention, then, to the two key tasks of the citizens of a constitutional democracy – laying the project of our democracy on a foundation of shared principle and organizing the powers of government to deliver on it. The mistakes made by the founding generation resided in their assessment of what power exclusively held could deliver for those outside the circle of power-sharing. It is our responsibility to correct their mistake and achieve genuine powersharing throughout our institutions — civic and political – so as to set our sights once again on a more perfect union.