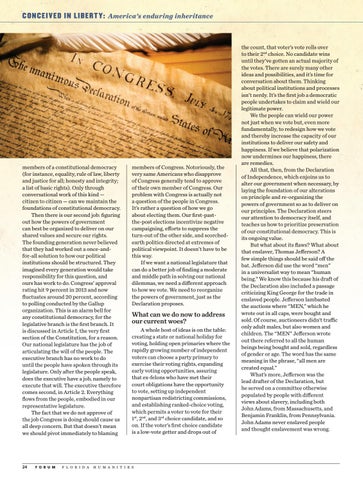 members of a constitutional democracy (for instance, equality, rule of law, liberty and justice for all; honesty and integrity; a list of basic rights). Only through conversational work of this kind — citizen to citizen — can we maintain the foundations of constitutional democracy. Then there is our second job: figuring out how the powers of government can best be organized to deliver on our shared values and secure our rights. The founding generation never believed that they had worked out a once-andfor-all solution to how our political institutions should be structured. They imagined every generation would take responsibility for this question, and ours has work to do. Congress’ approval rating hit 9 percent in 2013 and now fluctuates around 20 percent, according to polling conducted by the Gallup organization. This is an alarm bell for any constitutional democracy, for the legislative branch is the first branch. It is discussed in Article I, the very first section of the Constitution, for a reason. Our national legislature has the job of articulating the will of the people. The executive branch has no work to do until the people have spoken through its legislature. Only after the people speak, does the executive have a job, namely to execute that will. The executive therefore comes second, in Article 2. Everything flows from the people, embodied in our representative legislature. The fact that we do not approve of the job Congress is doing should cause us all deep concern. But that doesn’t mean we should pivot immediately to blaming

members of Congress. Notoriously, the very same Americans who disapprove of Congress generally tend to approve of their own member of Congress. Our problem with Congress is actually not a question of the people in Congress. It’s rather a question of how we go about electing them. Our first-pastthe-post elections incentivize negative campaigning, efforts to suppress the turn-out of the other side, and scorchedearth politics directed at extremes of political viewpoint. It doesn’t have to be this way. If we want a national legislature that can do a better job of finding a moderate and middle path in solving our national dilemmas, we need a different approach to how we vote. We need to reorganize the powers of government, just as the Declaration proposes.

What can we do now to address our current woes?

A whole host of ideas is on the table: creating a state or national holiday for voting, holding open primaries where the rapidly growing number of independent voters can choose a party primary to exercise their voting rights, expanding early voting opportunities, assuring that ex-felons who have met their court obligations have the opportunity to vote, setting up independent nonpartisan redistricting commissions, and establishing ranked-choice voting, which permits a voter to vote for their 1st, 2nd, and 3rd choice candidate, and so on. If the voter’s first choice candidate is a low-vote getter and drops out of

the count, that voter’s vote rolls over to their 2nd choice. No candidate wins until they’ve gotten an actual majority of the votes. There are surely many other ideas and possibilities, and it’s time for conversation about them. Thinking about political institutions and processes isn’t nerdy. It’s the first job a democratic people undertakes to claim and wield our legitimate power. We the people can wield our power not just when we vote but, even more fundamentally, to redesign how we vote and thereby increase the capacity of our institutions to deliver our safety and happiness. If we believe that polarization now undermines our happiness, there are remedies. All that, then, from the Declaration of Independence, which enjoins us to alter our government when necessary, by laying the foundation of our alterations on principle and re-organizing the powers of government so as to deliver on our principles. The Declaration steers our attention to democracy itself, and teaches us how to prioritize preservation of our constitutional democracy. This is its ongoing value. But what about its flaws? What about that enslaver, Thomas Jefferson? A few simple things should be said off the bat. Jefferson did use the word “men” in a universalist way to mean “human being.” We know this because his draft of the Declaration also included a passage criticizing King George for the trade in enslaved people. Jefferson lambasted the auctions where “MEN,” which he wrote out in all caps, were bought and sold. Of course, auctioneers didn’t traffic only adult males, but also women and children. The “MEN” Jefferson wrote out there referred to all the human beings being bought and sold, regardless of gender or age. The word has the same meaning in the phrase, “all men are created equal.” What’s more, Jefferson was the lead drafter of the Declaration, but he served on a committee otherwise populated by people with different views about slavery, including both John Adams, from Massachusetts, and Benjamin Franklin, from Pennsylvania. John Adams never enslaved people and thought enslavement was wrong.