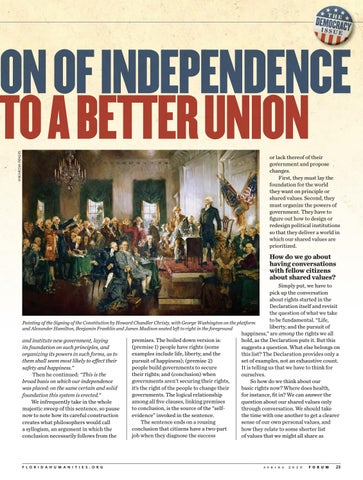 or lack thereof of their government and propose changes. First, they must lay the foundation for the world they want on principle or shared values. Second, they must organize the powers of government. They have to figure out how to design or redesign political institutions so that they deliver a world in which our shared values are prioritized.

How do we go about having conversations with fellow citizens about shared values?

Simply put, we have to pick up the conversation about rights started in the Declaration itself and revisit the question of what we take to be fundamental. “Life, Painting of the Signing of the Constitution by Howard Chandler Christy, with George Washington on the platform liberty, and the pursuit of and Alexander Hamilton, Benjamin Franklin and James Madison seated left to right in the foreground happiness,” are among the rights we all premises. The boiled down version is: hold, as the Declaration puts it. But this and institute new government, laying (premise 1) people have rights (some suggests a question. What else belongs on its foundation on such principles, and examples include life, liberty, and the this list? The Declaration provides only a organizing its powers in such forms, as to pursuit of happiness); (premise 2) set of examples, not an exhaustive count. them shall seem most likely to effect their people build governments to secure It is telling us that we have to think for safety and happiness.” their rights; and (conclusion) when ourselves. Then he continued: “This is the governments aren’t securing their rights, So how do we think about our broad basis on which our independence it’s the right of the people to change their basic rights now? Where does health, was placed: on the same certain and solid governments. The logical relationship for instance, fit in? We can answer the foundation this system is erected.” among all five clauses, linking premises question about our shared values only We infrequently take in the whole to conclusion, is the source of the “selfthrough conversation. We should take majestic sweep of this sentence, so pause evidence” invoked in the sentence. the time with one another to get a clearer now to note how its careful construction The sentence ends on a rousing sense of our own personal values, and creates what philosophers would call conclusion that citizens have a two-part how they relate to some shorter list a syllogism, an argument in which the job when they diagnose the success of values that we might all share as conclusion necessarily follows from the