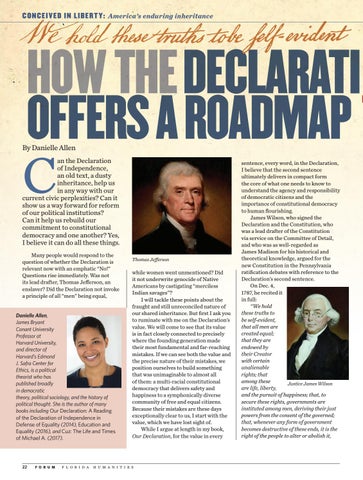 By Danielle Allen an the Declaration of Independence, an old text, a dusty inheritance, help us in any way with our current civic perplexities? Can it show us a way forward for reform of our political institutions? Can it help us rebuild our commitment to constitutional democracy and one another? Yes, I believe it can do all these things. Many people would respond to the question of whether the Declaration is relevant now with an emphatic “No!” Questions rise immediately. Was not its lead drafter, Thomas Jefferson, an enslaver? Did the Declaration not invoke a principle of all “men” being equal, Danielle Allen, James Bryant Conant University Professor at Harvard University, and director of Harvard’s Edmond J. Safra Center for Ethics, is a political theorist who has published broadly in democratic theory, political sociology, and the history of political thought. She is the author of many books including Our Declaration: A Reading of the Declaration of Independence in Defense of Equality (2014), Education and Equality (2016), and Cuz: The Life and Times of Michael A. (2017).

while women went unmentioned? Did it not underwrite genocide of Native Americans by castigating “merciless Indian savages”? I will tackle these points about the fraught and still unreconciled nature of our shared inheritance. But first I ask you to ruminate with me on the Declaration’s value. We will come to see that its value is in fact closely connected to precisely where the founding generation made their most fundamental and far-reaching mistakes. If we can see both the value and the precise nature of their mistakes, we position ourselves to build something that was unimaginable to almost all of them: a multi-racial constitutional democracy that delivers safety and happiness to a symphonically diverse community of free and equal citizens. Because their mistakes are these days exceptionally clear to us, I start with the value, which we have lost sight of. While I argue at length in my book, Our Declaration, for the value in every

sentence, every word, in the Declaration, I believe that the second sentence ultimately delivers in compact form the core of what one needs to know to understand the agency and responsibility of democratic citizens and the importance of constitutional democracy to human flourishing. James Wilson, who signed the Declaration and the Constitution, who was a lead drafter of the Constitution via service on the Committee of Detail, and who was as well-regarded as James Madison for his historical and theoretical knowledge, argued for the new Constitution in the Pennsylvania ratification debates with reference to the Declaration’s second sentence. On Dec. 4, 1787, he recited it in full: “We hold these truths to be self-evident, that all men are created equal; that they are endowed by their Creator with certain unalienable rights; that among these Justice James Wilson are life, liberty, and the pursuit of happiness; that, to secure these rights, governments are instituted among men, deriving their just powers from the consent of the governed; that, whenever any form of government becomes destructive of these ends, it is the right of the people to alter or abolish it,