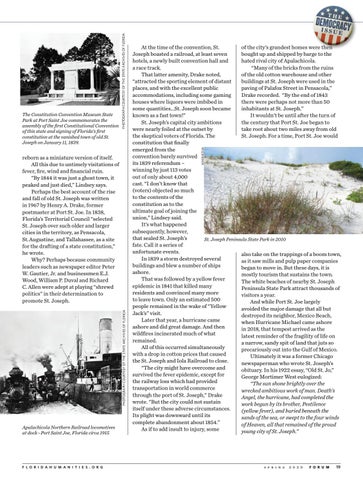 The Constitution Convention Museum State Park at Port Saint Joe commemorates the assembly of the first Constitutional Convention of this state and signing of Florida’s first constitution at the vanished town of old St. Joseph on January 11, 1839.

reborn as a miniature version of itself. All this due to untimely visitations of fever, fire, wind and financial ruin. “By 1844 it was just a ghost town, it peaked and just died,” Lindsey says. Perhaps the best account of the rise and fall of old St. Joseph was written in 1967 by Henry A. Drake, former postmaster at Port St. Joe. In 1838, Florida’s Territorial Council “selected St. Joseph over such older and larger cities in the territory, as Pensacola, St.Augustine, and Tallahassee, as a site for the drafting of a state constitution,” he wrote. Why? Perhaps because community leaders such as newspaper editor Peter W. Gautier, Jr. and businessmen E.J. Wood, William P. Duval and Richard C. Allen were adept at playing “shrewd politics” in their determination to promote St. Joseph.

At the time of the convention, St. of the city’s grandest homes were then Joseph boasted a railroad, at least seven bought up and shipped by barge to the hotels, a newly built convention hall and hated rival city of Apalachicola. a race track. “Many of the bricks from the ruins That latter amenity, Drake noted, of the old cotton warehouse and other “attracted the sporting element of distant buildings at St. Joseph were used in the places, and with the excellent public paving of Palafox Street in Pensacola,” accommodations, including some gaming Drake recorded. “By the end of 1843 houses where liquors were imbibed in there were perhaps not more than 50 some quantities...St. Joseph soon became inhabitants at St. Joseph.” known as a fast town!” It wouldn’t be until after the turn of St. Joseph’s capital city ambitions the century that Port St. Joe began to were nearly foiled at the outset by take root about two miles away from old the skeptical voters of Florida. The St. Joseph. For a time, Port St. Joe would constitution that finally emerged from the convention barely survived its 1839 referendum – winning by just 113 votes out of only about 4,000 cast. “I don’t know that (voters) objected so much to the contents of the constitution as to the ultimate goal of joining the union,” Lindsey said. It’s what happened subsequently, however, that sealed St. Joseph’s St. Joseph Peninsula State Park in 2010 fate. Call it a series of unfortunate events. also take on the trappings of a boom town, In 1839 a storm destroyed several as it saw mills and pulp paper companies buildings and blew a number of ships began to move in. But these days, it is ashore. mostly tourism that sustains the town. That was followed by a yellow fever The white beaches of nearby St. Joseph epidemic in 1841 that killed many Peninsula State Park attract thousands of residents and convinced many more visitors a year. to leave town. Only an estimated 500 And while Port St. Joe largely people remained in the wake of “Yellow avoided the major damage that all but Jack’s” visit. destroyed its neighbor, Mexico Beach, Later that year, a hurricane came when Hurricane Michael came ashore ashore and did great damage. And then in 2018, that tempest arrived as the wildfires incinerated much of what latest reminder of the fragility of life on remained. a narrow, sandy spit of land that juts so All of this occurred simultaneously precariously out into the Gulf of Mexico. with a drop in cotton prices that caused Ultimately it was a former Chicago the St. Joseph and Iola Railroad to close. newspaperman who wrote St. Joseph’s “The city might have overcome and obituary. In his 1922 essay, “Old St. Jo,” survived the fever epidemic, except for George Mortimer West eulogized: the railway loss which had provided “The sun shone brightly over the transportation in world commerce wrecked ambitious work of man. Death’s through the port of St. Joseph,” Drake Angel, the hurricane, had completed the wrote. “But the city could not sustain work begun by its brother, Pestilence itself under these adverse circumstances. (yellow fever), and buried beneath the Its plight was downward until its sands of the sea, or swept to the four winds complete abandonment about 1854.” of Heaven, all that remained of the proud As if to add insult to injury, some young city of St. Joseph.”