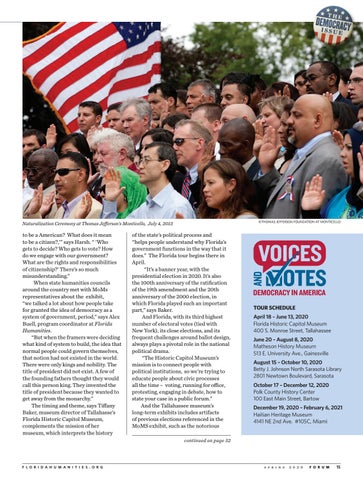 to be a American? What does it mean to be a citizen?,’” says Harsh. “ ‘Who gets to decide? Who gets to vote? How do we engage with our government? What are the rights and responsibilities of citizenship?’ There’s so much misunderstanding.” When state humanities councils around the country met with MoMs representatives about the exhibit, “we talked a lot about how people take for granted the idea of democracy as a system of government, period,” says Alex Buell, program coordinator at Florida Humanities. “But when the framers were deciding what kind of system to build, the idea that normal people could govern themselves, that notion had not existed in the world. There were only kings and nobility. The title of president did not exist. A few of the founding fathers thought they would call this person king. They invented the title of president because they wanted to get away from the monarchy.” The timing and theme, says Tiffany Baker, museum director of Tallahasse’s Florida Historic Capitol Museum, complements the mission of her museum, which interprets the history

of the state’s political process and “helps people understand why Florida’s government functions in the way that it does.” The Florida tour begins there in April. “It’s a banner year, with the presidential election in 2020. It’s also the 100th anniversary of the ratification of the 19th amendment and the 20th anniversary of the 2000 election, in which Florida played such an important part,” says Baker. And Florida, with its third highest number of electoral votes (tied with New York), its close elections, and its frequent challenges around ballot design, always plays a pivotal role in the national political drama. “The Historic Capitol Museum’s mission is to connect people with political institutions, so we’re trying to educate people about civic processes all the time – voting, running for office, protesting, engaging in debate, how to state your case in a public forum.” And the Tallahassee museum’s long-term exhibits includes artifacts of previous elections referenced in the MoMS exhibit, such as the notorious