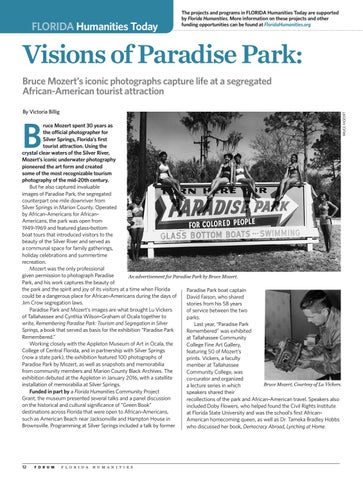 ruce Mozert spent 30 years as the official photographer for Silver Springs, Florida’s first tourist attraction. Using the crystal clear waters of the Silver River, Mozert’s iconic underwater photography pioneered the art form and created some of the most recognizable tourism photography of the mid-20th century. But he also captured invaluable images of Paradise Park, the segregated counterpart one mile downriver from Silver Springs in Marion County. Operated by African-Americans for AfricanAmericans, the park was open from 1949-1969 and featured glass-bottom boat tours that introduced visitors to the beauty of the Silver River and served as a communal space for family gatherings, holiday celebrations and summertime recreation. Mozert was the only professional given permission to photograph Paradise An advertisement for Paradise Park by Bruce Mozert. Park, and his work captures the beauty of the park and the spirit and joy of its visitors at a time when Florida Paradise Park boat captain could be a dangerous place for African-Americans during the days of David Faison, who shared Jim Crow segregation laws. stories from his 58 years Paradise Park and Mozert’s images are what brought Lu Vickers of service between the two of Tallahassee and Cynthia Wilson-Graham of Ocala together to parks. write, Remembering Paradise Park: Tourism and Segregation in Silver Last year, “Paradise Park Springs, a book that served as basis for the exhibition “Paradise Park Remembered” was exhibited Remembered.” at Tallahassee Community Working closely with the Appleton Museum of Art in Ocala, the College Fine Art Gallery, College of Central Florida, and in partnership with Silver Springs featuring 50 of Mozert’s (now a state park), the exhibition featured 100 photographs of prints. Vickers, a faculty Paradise Park by Mozert, as well as snapshots and memorabilia member at Tallahassee from community members and Marion County Black Archives. The Community College, was exhibition debuted at the Appleton in January 2016, with a satellite co-curator and organized Bruce Mozert, Courtesy of Lu Vickers. installation of memorabilia at Silver Springs. a lecture series in which Funded in part by a Florida Humanities Community Project speakers shared their Grant, the museum presented several talks and a panel discussion recollections of the park and African-American travel. Speakers also on the historical and cultural significance of “Green Book” included Doby Flowers, who helped found the Civil Rights Institute destinations across Florida that were open to African-Americans, at Florida State University and was the school’s first Africansuch as American Beach near Jacksonville and Hampton House in American homecoming queen, as well as Dr. Tameka Bradley Hobbs Brownsville. Programming at Silver Springs included a talk by former who discussed her book, Democracy Abroad, Lynching at Home.