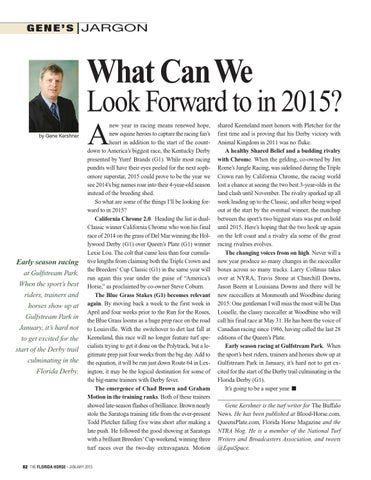 Early season racing at Gulfstream Park. When the sport’s best riders, trainers and horses show up at Gulfstream Park in January, it’s hard not to get excited for the start of the Derby trail culminating in the Florida Derby.

Look Forward to in 2015? A new year in racing means renewed hope, new equine heroes to capture the racing fan’s heart in addition to the start of the countdown to America’s biggest race, the Kentucky Derby presented by Yum! Brands (G1). While most racing pundits will have their eyes peeled for the next sophomore superstar, 2015 could prove to be the year we see 2014’s big names roar into their 4-year-old season instead of the breeding shed. So what are some of the things I’ll be looking forward to in 2015? California Chrome 2.0. Heading the list is dualClassic winner California Chrome who won his final race of 2014 on the grass of Del Mar winning the Hollywood Derby (G1) over Queen’s Plate (G1) winner Lexie Lou. The colt that came less than four cumulative lengths from claiming both the Triple Crown and the Breeders’ Cup Classic (G1) in the same year will run again this year under the guise of “America’s Horse,” as proclaimed by co-owner Steve Coburn. The Blue Grass Stakes (G1) becomes relevant again. By moving back a week to the first week in April and four weeks prior to the Run for the Roses, the Blue Grass looms as a huge prep race on the road to Louisville. With the switchover to dirt last fall at Keeneland, this race will no longer feature turf specialists trying to get it done on the Polytrack, but a legitimate prep just four weeks from the big day. Add to the equation, it will be run just down Route 64 in Lexington; it may be the logical destination for some of the big-name trainers with Derby fever. The emergence of Chad Brown and Graham Motion in the training ranks. Both of these trainers showed late-season flashes of brilliance. Brown nearly stole the Saratoga training title from the ever-present Todd Pletcher falling five wins short after making a late push. He followed the good showing at Saratoga with a brilliant Breeders’ Cup weekend, winning three turf races over the two-day extravaganza. Motion

shared Keeneland meet honors with Pletcher for the first time and is proving that his Derby victory with Animal Kingdom in 2011 was no fluke. A healthy Shared Belief and a budding rivalry with Chrome. When the gelding, co-owned by Jim Rome’s Jungle Racing, was sidelined during the Triple Crown run by California Chrome, the racing world lost a chance at seeing the two best 3-year-olds in the land clash until November. The rivalry sparked up all week leading up to the Classic, and after being wiped out at the start by the eventual winner, the matchup between the sport’s two biggest stars was put on hold until 2015. Here’s hoping that the two hook up again on the left coast and a rivalry ala some of the great racing rivalries evolves. The changing voices from on high. Never will a new year produce so many changes in the racecaller boxes across so many tracks. Larry Collmus takes over at NYRA, Travis Stone at Churchill Downs, Jason Beem at Louisiana Downs and there will be new racecallers at Monmouth and Woodbine during 2015. One gentleman I will miss the most will be Dan Loiselle, the classy racecaller at Woodbine who will call his final race at May 31. He has been the voice of Canadian racing since 1986, having called the last 28 editions of the Queen’s Plate. Early season racing at Gulfstream Park. When the sport’s best riders, trainers and horses show up at Gulfstream Park in January, it’s hard not to get excited for the start of the Derby trail culminating in the Florida Derby (G1). It’s going to be a super year. ■

Gene Kershner is the turf writer for The Buffalo News. He has been published at Blood-Horse.com, QueensPlate.com, Florida Horse Magazine and the NTRA blog. He is a member of the National Turf Writers and Broadcasters Association, and tweets @EquiSpace.

The January 2015 issue of The Florida Horse