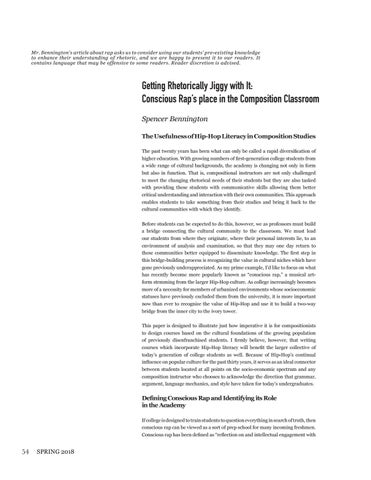 Mr. Bennington’s article about rap asks us to consider using our students’ pre-existing knowledge to enhance their understanding of rhetoric, and we are happy to present it to our readers. It contains language that may be offensive to some readers. Reader discretion is advised.

Getting Rhetorically Jiggy with It: Conscious Rap’s place in the Composition Classroom Spencer Bennington The Usefulness of Hip-Hop Literacy in Composition Studies The past twenty years has been what can only be called a rapid diversification of higher education. With growing numbers of first-generation college students from a wide range of cultural backgrounds, the academy is changing not only in form but also in function. That is, compositional instructors are not only challenged to meet the changing rhetorical needs of their students but they are also tasked with providing these students with communicative skills allowing them better critical understanding and interaction with their own communities. This approach enables students to take something from their studies and bring it back to the cultural communities with which they identify. Before students can be expected to do this, however, we as professors must build a bridge connecting the cultural community to the classroom. We must lead our students from where they originate, where their personal interests lie, to an environment of analysis and examination, so that they may one day return to these communities better equipped to disseminate knowledge. The first step in this bridge-building process is recognizing the value in cultural niches which have gone previously underappreciated. As my prime example, I’d like to focus on what has recently become more popularly known as “conscious rap,” a musical artform stemming from the larger Hip-Hop culture. As college increasingly becomes more of a necessity for members of urbanized environments whose socioeconomic statuses have previously excluded them from the university, it is more important now than ever to recognize the value of Hip-Hop and use it to build a two-way bridge from the inner city to the ivory tower. This paper is designed to illustrate just how imperative it is for compositionists to design courses based on the cultural foundations of the growing population of previously disenfranchised students. I firmly believe, however, that writing courses which incorporate Hip-Hop literacy will benefit the larger collective of today’s generation of college students as well. Because of Hip-Hop’s continual influence on popular culture for the past thirty years, it serves as an ideal connector between students located at all points on the socio-economic spectrum and any composition instructor who chooses to acknowledge the direction that grammar, argument, language mechanics, and style have taken for today’s undergraduates.

Defining Conscious Rap and Identifying its Role in the Academy If college is designed to train students to question everything in search of truth, then conscious rap can be viewed as a sort of prep school for many incoming freshmen. Conscious rap has been defined as “reflection on and intellectual engagement with

Official journal of the Florida Council of Teachers of English. 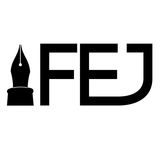