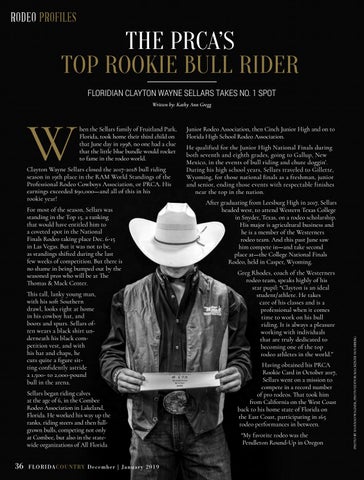 Clayton Wayne Sellars closed the 2017-2018 bull riding season in 19th place in the RAM World Standings of the Professional Rodeo Cowboys Association, or PRCA. His earnings exceeded $90,000—and all of this in his rookie year! For most of the season, Sellars was standing in the Top 15, a ranking that would have entitled him to a coveted spot in the National Finals Rodeo taking place Dec. 6-15 in Las Vegas. But it was not to be, as standings shifted during the last few weeks of competition. But there is no shame in being bumped out by the seasoned pros who will be at The Thomas & Mack Center. This tall, lanky young man, with his soft Southern drawl, looks right at home in his cowboy hat, and boots and spurs. Sellars often wears a black shirt underneath his black competition vest, and with his hat and chaps, he cuts quite a figure sitting confidently astride a 1,500- to 2,000-pound bull in the arena. Sellars began riding calves at the age of 6, in the Combee Rodeo Association in Lakeland, Florida. He worked his way up the ranks, riding steers and then fullgrown bulls, competing not only at Combee, but also in the statewide organizations of All Florida

Junior Rodeo Association, then Cinch Junior High and on to Florida High School Rodeo Association. He qualified for the Junior High National Finals during both seventh and eighth grades, going to Gallup, New Mexico, in the events of bull riding and chute doggin’. During his high school years, Sellars traveled to Gillette, Wyoming, for those national finals as a freshman, junior and senior, ending those events with respectable finishes near the top in the nation. After graduating from Leesburg High in 2017, Sellars headed west, to attend Western Texas College in Snyder, Texas, on a rodeo scholarship. His major is agricultural business and he is a member of the Westerners rodeo team. And this past June saw him compete in—and take second place at—the College National Finals Rodeo, held in Casper, Wyoming. Greg Rhodes, coach of the Westerners rodeo team, speaks highly of his star pupil: “Clayton is an ideal student/athlete. He takes care of his classes and is a professional when it comes time to work on his bull riding. It is always a pleasure working with individuals that are truly dedicated to becoming one of the top rodeo athletes in the world.” Having obtained his PRCA Rookie Card in October 2017, Sellars went on a mission to compete in a record number of pro rodeos. That took him from California on the West Coast back to his home state of Florida on the East Coast, participating in 165 rodeo performances in between. “My favorite rodeo was the Pendleton Round-Up in Oregon

hen the Sellars family of Fruitland Park, Florida, took home their third child on that June day in 1998, no one had a clue that the little blue bundle would rocket to fame in the rodeo world. 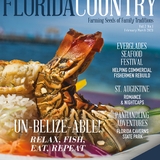