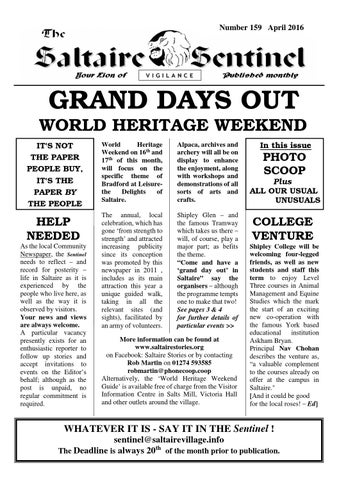 GRAND DAYS OUT WORLD HERITAGE WEEKEND IT'S NOT THE PAPER PEOPLE BUY, IT'S THE PAPER BY THE PEOPLE

HELP NEEDED As the local Community Newspaper, the Sentinel needs to reflect – and record for posterity – life in Saltaire as it is experienced by the people who live here, as well as the way it is observed by visitors. Your news and views are always welcome. A particular vacancy presently exists for an enthusiastic reporter to follow up stories and accept invitations to events on the Editor’s behalf; although as the post is unpaid, no regular commitment is required.

World Heritage Weekend on 16th and 17th of this month, will focus on the specific theme of Bradford at Leisurethe Delights of Saltaire.

Alpaca, archives and archery will all be on display to enhance the enjoyment, along with workshops and demonstrations of all sorts of arts and crafts.

The annual, local celebration, which has gone ‘from strength to strength’ and attracted increasing publicity since its conception was promoted by this newspaper in 2011 , includes as its main attraction this year a unique guided walk, taking in all the relevant sites (and sights), facilitated by an army of volunteers.

Shipley Glen – and the famous Tramway which takes us there – will, of course, play a major part; as befits the theme. “Come and have a ‘grand day out’ in Saltaire” say the organisers – although the programme tempts one to make that two! See pages 3 & 4 for further details of particular events >>

More information can be found at www.saltairestories.org on Facebook: Saltaire Stories or by contacting Rob Martin on 01274 593585 robmartin@phonecoop.coop Alternatively, the ‘World Heritage Weekend Guide’ is available free of charge from the Visitor Information Centre in Salts Mill, Victoria Hall and other outlets around the village.

PHOTO SCOOP Plus ALL OUR USUAL UNUSUALS

COLLEGE VENTURE Shipley College will be welcoming four-legged friends, as well as new students and staff this term to enjoy Level Three courses in Animal Management and Equine Studies which the mark the start of an exciting new co-operation with the famous York based educational institution Askham Bryan. Principal Nav Chohan describes the venture as, “a valuable complement to the courses already on offer at the campus in Saltaire." [And it could be good for the local roses! – Ed]

WHATEVER IT IS - SAY IT IN THE Sentinel ! sentinel@saltairevillage.info The Deadline is always 20th of the month prior to publication.

Original drawing by John Holroyd In October, 2013, our ‘Local History Explorers’ [see below] provided an article on the Saltaire Lifeboat, describing how it was originally intended for the East Coast but was eventually sent to Stornoway on the Isle of Lewis. Following in their footsteps, John Holroyd found the old boathouse and discovered that the people of Lewis petitioned the Royal Naval Lifeboat Institution in the early 1860s for a boat to be provided to protect their local shipping in times of emergency. A booklet in the Stromness Maritime Museum reveals that, “the first Stromness lifeboat arrived during October 1867. She was paid for out of a legacy from Sir Titus Salt of Methley Hall, Leeds, and named the ‘Saltaire’. Her period of service lasted from 1867 to 1891. She was a self-righting boat, 35 feet long.” The Ness Head boathouse, which cost £200 to build, still stands; albeit roofless and with its main doorway considerably altered. A large board within the 1901 museum commemorates lives saved on the few occasions the vessel was launched. A model of the Saltaire lifeboat can still be seen on the first floor landing of Victoria Hall. Roger Clarke ___________________________________________________________________

IN SEARCH OF IRON AGE WALL Local history explorers David and Jonathan Starley return to the Sentinel, our interest rekindled by the Hirst Wood Regeneration Group asking about historical sites which might be included on their website. One intriguing monument that seemed poorly understood was featured in a local press clipping from 1952. This included a photo of an ancient wall, dated to the Iron Age (450-55BC) by Dr. Arthur Raistrick - a famous and widely published archaeologist with local roots, being born at 1 Lockwood Street in Saltaire. So, 60 years after the newspaper article, where was the wall? Exploration of Hirst Woods near the canal, raised fears that this monument might no longer exist, until archaeologist Dave Weldrake proposed an alternative area - on the other (south) side of the railway line. Following a muddy and overgrown path we found it. In some places the wall is no more than an irregular line of boulders, while in other places orthostats (stone slabs set on edge) survive, one standing almost a metre above ground and perhaps weighing close to a tonne. The wall runs parallel and a metre or so to the south of the more recent boundary wall of the old Hirst Wood cemetery. Where the cemetery wall turns north, the line of the older wall then continues down towards the track that is the continuation of Slenningford Grove. The purpose of the wall provides grounds for speculation - perhaps to indicate territorial ownership or enclose livestock, to clear agricultural land of troublesome boulders or even the archaeologists' favourite fallback: “for ritual purposes”. In any case it was a massive task and suggests that our area was well populated in late prehistoric times.

The SPA 21 Titus Street The Authentic

CAROLINE SOCIAL CLUB Caroline Street, always has a welcome for all.

SALTS MILL Opened in 1853 and still

Open Every Day Attractions include:

Cafe in to the Opera SALTAIRE HISTORY EXHIBITION 1853 Gallery THE HOME and many other, varied retail outlets ADMISSION FREE 01274 - 531163

Harry Gration [left], the eternally popular BBC presenter, and his colleague, the remarkably reliable weather forecaster Paul Hudson, were clearly delighted by the opportunity to appear in the Sentinel when they visited Saltaire last month. To be fair, they were snapped unaware, during serious conversations with local residents and students of Shipley College, despite being in the middle of a truly heroic sponsored ‘three-legged’ walk of 121 miles around Yorkshire which raised over £277,000 for the charity Sport Relief. [This newspaper always welcomes printable photographs to accompany reports by readers – but no more ‘paparazzi’, please! Editor]

Many Regular Events Rooms for Hire Visit the website at: www.victoriahallsaltaire.co.uk

MORE BIG NAMES IN TOWN THIS MONTH Members of the Salt and Roberts families will be visiting the village on Saturday, 16th of this month to take part in a special event organised by the Saltaire History Club as part of the World Heritage Weekend. At the Learning Resource Centre, housed by Shipley College in its Exhibition Building on Exhibition Road, presentations will be given by Nick Salt and Jamie Roberts. In addition, Pauline Ford will be revealing new findings about Catherine Salt, wife of Titus Salt Jr. Dave Shaw, who founded the commendably successful History Club, guarantees “a very informative occasion”, as the latest research findings are “considerable” and will be open for discussion. Tickets for the event, which is scheduled for 24pm, are free, but limited. If there are any left by the time you read this, they may be obtained by e-mailing Maggie Smith: smithmaggie6@gmail.com The next of the regular meetings of the History Club will be in the Learning Resource Centre on Thursday, June 2nd, (7-9pm). Entrance is free and all are welcome. Watch this space for details

can also be found at Saltaire

ADVERTISING Space in the Sentinel is not for sale. Please note, nonetheless, that we are always pleased to print, free of charge, short articles which feature enterprise of interest and potential benefit to the local community.

VILLAGE WEBSITE The Saltaire Sentinel is available online, via the not for profit Saltaire Village Website, thanks to Pamela Reynolds, who manages the site at www.saltairevillage.info

WINTER BANDSTAND Free music at Caroline Social Club, Caroline Street, on the second Sunday of every month from 2pm.

OWL IN PARK HOOTING MAY NOT LAST Our local correspondent reports from Roberts Park: The Park has been particularly pleasurable at dusk with the bandstand dome illuminated in colour, and a male tawny owl hooting from one of the tall pines. I'm told it arrived (or started hooting) early in March and performs at 5.30 in the morning and again at dusk. Apparently this doesn't last; it stops once territories have been defined. ____________________________________________

EDDIE ON SONG AS ALWAYS Saltaire’s own songster Eddie Lawler will be on board the historic canal boat The Kennet when it moors again near the bridge at the bottom of Victoria Road for the World Heritage Weekend, writing and singing, together with residents, a new piece, “Welcome to Our Airedale Home”. Eddie’s major work this year is “Tracking the Brontes”: a celebration of the 200th anniversary of Charlotte’s birth and featuring the soprano Charissa Hutchins, who will join Eddie when he presents “short sections” at a “drop-in event” appropriately billed as “Charlotte’s Birthday Party” to be held, equally appropriately, in the Schoolroom, next to the Parsonage in Haworth on Thursday, April 21st. Keep up with Eddie [if you can!] by visiting his website: www.eddie-lawler.co.uk or by “following” him on Facebook or Twitter.

RSPB AGM On Friday, April 15th at 7.30pm in the Kirkgate Centre, Shipley, the RSPB Airedale Branch has its Annual General Meeting, followed by Conservation Begins at Home, an illustrated talk by Laurence Rose. Admission £3 (children admitted free.) “Please come along and find out what the group has been up to during the past year,” says Debbie White, “You may be able to help us make next year even better!” On Sunday, April 17th there will be a free guided walk around Low Wood at 9am. For further details of either: 01274 582078 abrspb@blueyonder.co.uk or see the website at www.rspb.org.uk/groups/ airedaleandbradford WORLD HERITAGE WHEELIE Does NOT talk rubbish

"Don’t ever give me anything written by Eddie Lawler!”

The Saltaire Sentinel, written by the people of Saltaire and photocopied by Shipley College in the heart of Saltaire every month, is not affiliated to, nor in any way controlled or influenced by any group, society or organization. sentinel@saltairevillage.info Sadly, sooner or later you will dispose of this copy of the Sentinel. Please do so with care for our World Heritage Site environment. 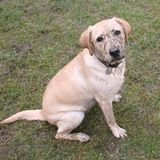 The Saltaire Sentinel is edited by James Duncan and is not affiliated to any group or organisation. It publishes news and articles of intere...

The Saltaire Sentinel is edited by James Duncan and is not affiliated to any group or organisation. It publishes news and articles of intere...