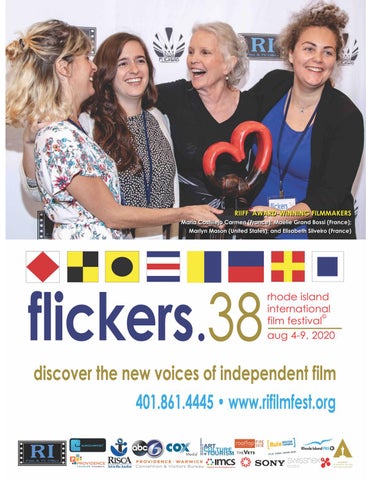 Welcome to the City of Providence! We invite you to experience all that our creative capital has to offer. • Enjoy al fresco dining on Federal Hill • Walking tours to explore the arts, murals and sculptures • Open Air Saturday’s in downtown with socially distant shopping and dining options Don’t forget to wear a mask (and wash your hands)!

The 24TH ANNUAL FLICKERS’ RHODE ISLAND INTERNATIONAL FILM FESTIVAL (RIIFF), welcomes stellar filmmaking talents from all over the world to beautiful Providence, Rhode Island—one of America’s oldest and most beloved cities. For two decades, RIIFF has embraced its visitors with the sort of warmhearted, independent spirit that fosters long-lasting friendships, sparks exciting creative projects, and inspires guests to return again and again. It’s little wonder that Chris Gore’s Ultimate Film Festival Survival Guide praises RIIFF as “the kind of intimate festival experience that will change your life.” In 2019, RIIFF presented 321 films out of 6,941 films entered in competition, representing 51 countries and welcomed 347 filmmakers, producers, cast, and crew. Now it’s gearing up to be even bigger and better than ever, maintaining its reputation as the largest and most visible film festival in New England. With a slew of unique offerings—including the Rhode Island Film Forum, ScriptBiz, The Future Filmmaking Symposium, Film Preservation Forum, Flickers’ Mentorship Program, Film Youth Jury, Virtual Reality Workshops, Screenwriter’s Retreat, KidsEye screenings, extended Filmmaking and Animation Workshops for kids featuring accepted filmmakers, and a closing night block party —RIIFF ensures each of its participating visitors is treated to an enriching, inspiring, and unpredictable festival experience. RIIFF is proud to be one of 10 Festivals in the world that is an Academy Award qualifier in the Live Action, Animation and Documentary Short categories and a qualifier with the British Academy of Film and Television Arts (BAFTA). With vanguard programming that seeks to showcase new voices in independent filmmaking from across the globe, RIIFF serves as an exceptional platform from which to launch exciting careers. Ten films that have premiered at RIIFF have won Academy Awards, and a total of 72 have been nominated, while many have gained distribution with the likes of HBO, Showtime, and IFC. A wide range of competitive categories—including Horror, Children’s, Gay &amp; Lesbian, Documentary, Science Fiction, and Animated films—offers entrants and audience members a veritable buffet of great stories, surprises, and narrative formats. There’s even a screenplay and teleplay competition, designed to give talented screen scribes some well-deserved industry credibility. At RIIFF, there’s no shortage of ways to get noticed!

ORGANIZATION MISSION / OBJECTIVE FLICKERS is a 501(c)(3) non-profit arts organization that supports and promotes the film arts in Rhode Island and throughout New England. Over the past two decades, its production, the Rhode Island International Film Festival, has screened 5,426 independent films and videos out of 68,337 entries, presented 1,322 World/North American premieres, featured over 1,100 entries that were locally produced, and hosted 4,915 filmmakers and crew. Since its inception, over 453,000 film lovers have enjoyed the Rhode Island International Film Festival and its programming, not including those in New England watching its weekly broadcast and cable programming series, doubleFEATURE. The Flickers’ Rhode Island International Film Festival is dedicated to the creation of opportunities for artistic exchange among independent filmmakers, directors, producers, and the film-going public. The festival’s mission is to discover fresh and talented voices in the world of independent film.

MORE ABOUT THE FESTIVAL RIIFF encourages exhibiting filmmakers—and all entrants-- to attend the Festival, and offers all-access passes, plus reduced rates on area hotels, inns and B&amp;B&#39;s, and the option to stay free of charge with community hosts. RIIFF grants over $60,000 USD worth in prizes to winning filmmakers, including software, scholarships, consulting, and production services. The festival hosts a series of educational events, master classes and symposia on filmmaking, drawing leaders in the field to present. Nightly after-parties throughout the city of Providence are designed to provide a networking platform for visiting filmmakers and industry professionals. RIIFF offers a variety of prestigious awards to some of the most talented artists in (and soon to be in) the business. The festival’s Gilbert Stuart Artistic Vision Lifetime Achievement Award has been bestowed upon Academy Award-winning actors Ernest Borgnine and Patricia Neal, Oscar-nominated actors Seymour Cassel and Cicely Tyson, acclaimed actors of stage and screen, Paul Sorvino and Theo Bikel, director Blake Edwards, special effects icon, Douglas Trumbull, and production design legend, Joseph M. Alves. The festival’s Creative Vision and Crystal Image Awards recognizing outstanding directors, actors, writers, film talent, has been awarded to such talents as Karen Allen, Zach Braff, Blythe Danner, Ioan Gruffudd, Rosa von Praunheim, Michael Showalter, composer Klaus Badelt, and children’s book author Sandra Boynton. More than simply a film festival, RIIFF champions artistic vision in any form and is dedicated to sharing that vision with a diverse and enthusiastic audience that hungers for great storytelling.

Welcome to Providence! You have picked a wonderful time of year to visit our vibrant

Providence has received national acclaim for its world-class dining and dynamic arts scene. GQ calls us “America’s Coolest City” and Providence was ranked in the top three by the readers of Travel + Leisure in its “America’s Favorite Cities” poll, earning high marks for its food, art and culture. From the Washington Post to Vogue, the media is taking notice of all that Providence offers. Flickers, the Rhode Island International Film Festival, has played a pivotal role in making this city a top arts destination, bringing talented filmmakers from around the globe to this Creative Capital. Our vibrant neighborhoods are part of what makes Providence truly great. Federal Hill – our little Italy – is home to dozens of restaurants, bakeries and food shops. The lovely East Side features historic homes and eclectic shopping. Downtown Providence boasts stunning river views and myriad entertainment options. The West Broadway area is a haven for up-andcoming artists and ethnic restaurants and food markets that represent every corner of the globe. While visiting, I hope you will take the opportunity to explore the rest of Rhode Island. Our small state is brimming with big things to do. Long swaths of beautiful beaches, a rich tapestry of cultural activities, historic sites with deep American roots, and some of the best restaurants in the country are all packed within our borders. Congratulations and thank you to the RI International Film Festival for being a great ambassador for our city and for championing the work of artists local, regionally and internationally.

From the many diverse locations to our outstanding restaurants and cultural attractions, I’m certain you will ﬁnd that Rhode Island is a fun, ﬁlm-friendly neighborhood. This compact state is merely forty-eight miles long and about forty-miles wide, so please see as much of it as you can. Each area is diverse, rich with history and visually unique. One twenty minute road trip can take you from a vibrant cityscape to a scenic ocean drive and, if you keep going, you may wind up at one of our magniﬁcent mansions. Please do not hesitate to call our ofﬁce if you have any questions or needs. We stand ready to assist you any way we can and the Rhode Island Film &amp; TV Ofﬁce is always here to help you make some movie magic! Congratulations to George T. Marshall and the RIIFF volunteers/sponsors! Enjoy the show! Steven Feinberg Executive Director Rhode Island Film &amp; Television Ofﬁ ce One Capitol Hill 3rd Floor Providence, RI 02908 Phone: 401-222-3456 (222-FILM) Fax: 401-222-3018 E MAIL: steven.feinberg@arts.ri.gov WEB SITE:www.ﬁ lm.ri.gov RHODE ISLAND: THE INDEPENDENT STATE OF FILM©

Greetings from the beautiful Ocean State! On behalf of the Film &amp; Television Ofﬁ ce, I welcome you to discover Rhode Island.

2019 FLICKERS’ FACT SHEET The FLICKERS’ RHODE ISLAND INTERNATIONAL FILM FESTIVAL is accredited by the Academy of Motion Picture Arts and Sciences as a qualifier for Oscar® in the Live Action, Documentary Short and Animation Short categories. It is also one of only 10 Festivals in the United States accredited by the British Academy of Film and Television Arts (BAFTA) and is a qualifier for the Canadian Screen Awards. Only 10 festivals out of over 7,000 worldwide share these honors. Rhode Island welcomed record crowds in August for the 23rd Annual Flickers’ Rhode Island International Film Festival (RIIFF). 347 filmmakers, cast and crew from around the world came to exhibit their films, meet with distributors and compete for the Festival’s top prizes. Notable celebrities attending included actress/comedienne, Cheri Oteri, who received the Annual Dream Maker Award. FLICKERS is a 501(c)(3) non-profit arts organization that supports and promotes the film arts in Rhode Island and throughout New England. Over the past two decades, its production, the Rhode Island International Film Festival, has screened 5,426 independent films and videos out of 68,337 entries, presented 1,322 World/North American premieres, featured over 1,100 entries that were locally produced, and hosted 4,915 filmmakers and crew. Since its inception, over 453,000 film lovers have enjoyed the Rhode Island International Film Festival and its programming, not including those in New England watching its weekly broadcast and cable programming series, doubleFEATURE.

Dear neighbor, Welcome to the 24th 23rd Annual Flickers’ Rhode Island International Film Festival! Providence is known far and wide as the Creative Capital because our City is bursting with history, art, culinary treasures, breathtaking architecture, a vibrant arts scene, family-friendly events and activities. The Rhode Island International Film Festival hosts many diverse and creative professionals from across the country and the globe. This means that many filmmakers and audience members are often making their first trip to our beautiful ocean state and Providence. For those who are visiting us for the first time, I encourage you to explore Providence and its historic streets and neighborhoods that each possess its own distinctive character and unique experiences around every corner. You may find that you want to use one of these neighborhoods as a backdrop for your next film! With so much to do, see, and discover, Providence will have you coming back again and again for more; and we will be here, creating what’s next. Welcome to Providence. Please enjoy your stay and come back to visit us again soon! Sincerely, Jorge O. Elorza

Supplying filmmakers with all the gear they need since 1982 From production expendables and supplies to the largest rental inventory of professional production and postproduction equipment in the New England area, we’ve got the gear, knowhow, services and support to help keep your projects running smoothly.

Shouldn’t all Rhode Islanders have access to the arts? The arts are more than just an important part of our state’s economy. For young people, the arts are a path to success. The arts contribute to achievement in school, particularly among disadvantaged students. For cities and towns, the arts promote civic engagement and encourage neighborhood and downtown revitalization. They make our communities more liveable. With all that’s good about the arts , shouldn’ t all Rhode Islanders be able to enjoy and participate in what our state has to offer?

That’s where we come in. Rhode Island’s investment in the arts is small (just 7/100 ths of 1% of our state’s budget). With that, we managed to reach over 1.2 million Rhode Islanders and visitors last year, including over 189,000 young people. Let’s ensure that all Rhode Islanders can benefit from the arts in the Ocean State.

The 24TH ANNUAL FLICKERS’ “VIRTUAL” RHODE ISLAND INTERNATIONAL FILM FESTIVAL (RIIFF), running August 4-9, 2020, is a major destination on the Festival circuit and recognized by the Academy of Motion Picture Arts and Sciences as a Qualifying Festival in all short film categories. It is the only Festival in New England with this accolade. The Festival welcomes stellar filmmaking talents from all over the world to beautiful Providence, Rhode Island—one of America’s oldest and most beloved cities. This year, responding to the impact of COVID-19, the Festival will take a hybrid approach utilizing area Drive-In theatres with social distancing and protocols/guidance from the Rhode Island Governor’s Office and the Department of Health and for special screenings. Virtual programming will also take place online.