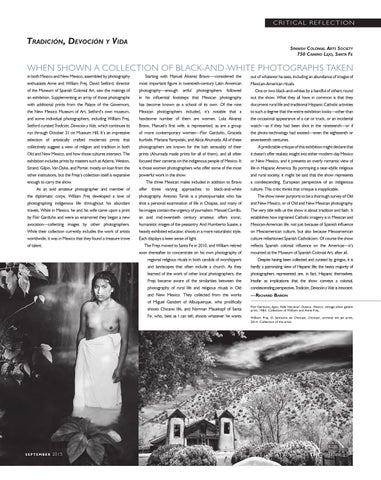 WHEN SHOWN A COLLECTION OF BLACK-AND-WHITE PHOTOGRAPHS TAKEN in both Mexico and New Mexico, assembled by photography

Starting with Manuel Álvarez Bravo—-considered the

out of whatever he sees, including an abundance of images of

of the Museum of Spanish Colonial Art, saw the makings of

an exhibition. Supplementing an array of those photographs

in his influential footsteps that Mexican photography

out the show. What they all have in common is that they

with additional prints from the Palace of the Governors,

has become known as a school of its own. Of the nine

the New Mexico Museum of Art, Setford’s own museum,

to such a degree that the entire exhibition looks—other than

and some individual photographers, including William Frej,

handsome number of them are women. Lola Álvarez

the occasional appearance of a car or truck, or an incidental

Bravo, Manuel’s first wife, is represented, as are a group

run through October 31 on Museum Hill. It’s an impressive

Iturbide, Mariana Yampolski, and Alicia Ahumada. All of these

collectively suggest a view of religion and tradition in both

photographers are known for the lush sensuality of their

A predictable critique of this exhibition might declare that

Old and New Mexico, and how those cultures intersect. The

prints (Ahumada made prints for all of them), and all often

it doesn’t offer realistic insight into either modern-day Mexico

exhibition includes prints by masters such as Adams, Weston,

focused their cameras on the indigenous people of Mexico. It

or New Mexico, and it presents an overly romantic view of

Strand, Gilpin, Van Dyke, and Porter, mostly on loan from the

is those women photographers who offer some of the most

life in Hispanic America. By portraying a near-idyllic religious

other institutions, but the Frejs’s collection itself is expansive

powerful work in the show.

and rural society, it might be said that the show represents

enough to carry the show.

The three Mexican males included in addition to Bravo

a condescending, European perspective of an indigenous

As an avid amateur photographer and member of

the diplomatic corps, William Frej developed a love of

photography. Antonio Turok is a photojournalist who has

The show never purports to be a thorough survey of Old

photographing indigenous life throughout his abundant

shot a personal examination of life in Chiapas, and many of

travels. While in Mexico, he and his wife came upon a print

his images contain the urgency of journalism. Manuel Carrillo,

The very title tells us the show is about tradition and faith. It

by Flor Garduño and were so enamored they began a new

establishes how ingrained Catholic imagery is in Mexican and

avocation—collecting images by other photographers.

humanistic images of the peasantry. And Humberto Suaste, a

Mexican-American life, not just because of Spanish influence

While their collection currently includes the work of artists

worldwide, it was in Mexico that they found a treasure trove

Each displays a keen sense of light.

The Frejs moved to Santa Fe in 2010, and William retired soon thereafter to concentrate on his own photography of

culture. This critic thinks that critique is inapplicable.

reflects Spanish colonial influence on the Americas—it’s mounted at the Museum of Spanish Colonial Art, after all.

regional religious rituals in both candids of worshippers

Despite having been collected and curated by gringos, it is

and landscapes that often include a church. As they

hardly a patronizing view of Hispanic life; the heavy majority of

learned of the work of other local photographers, the

photographers represented are, in fact, Hispanic themselves.

Frejs became aware of the similarities between the

Insofar as implications that the show conveys a colonial,

photography of rural life and religious rituals in Old

and New Mexico. They collected from the works

of Miguel Gandert of Albuquerque, who prolifically shoots Chicano life, and Norman Mauskopf of Santa Fe, who, best as I can tell, shoots whatever he wants