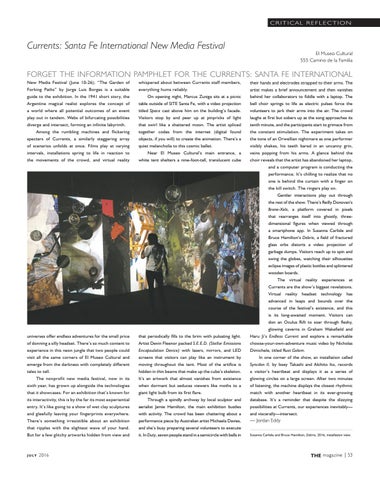 whispered about between Currents staff members,

their hands and electrodes strapped to their arms. The

Forking Paths” by Jorge Luis Borges is a suitable

artist makes a brief announcement and then vanishes

guide to the exhibition. In the 1941 short story, the

On opening night, Marcus Zuniga sits at a picnic

behind her collaborators to fiddle with a laptop. The

table outside of SITE Santa Fe, with a video projection

bell choir springs to life as electric pulses force the

a world where all potential outcomes of an event

titled Space cast above him on the building’s facade.

volunteers to jerk their arms into the air. The crowd

play out in tandem. Webs of bifurcating possibilities

Visitors stop by and peer up at pinpricks of light

laughs at first but sobers up as the song approaches its

that swirl like a shattered moon. The artist spliced

tenth minute, and the participants start to grimace from

Among the rumbling machines and flickering

together codes from the internet (digital found

the constant stimulation. The experiment takes on

objects, if you will) to create the animation. There’s a

the tone of an Orwellian nightmare as one performer

of scenarios unfolds at once. Films play at varying

quiet melancholia to this cosmic ballet.

visibly shakes, his teeth bared in an uncanny grin,

intervals, installations spring to life in reaction to

veins popping from his arms. A glance behind the

the movements of the crowd, and virtual reality

choir reveals that the artist has abandoned her laptop, and a computer program is conducting the performance. It’s chilling to realize that no one is behind the curtain with a finger on the kill switch. The ringers play on. Gentler interactions play out through the rest of the show. There’s Reilly Donovan’s Brane-Xels, a platform covered in pixels that rearranges itself into ghostly, threedimensional figures when viewed through a smartphone app. In Susanna Carlisle and Bruce Hamilton’s Debris, a field of fractured glass orbs distorts a video projection of garbage dumps. Visitors reach up to spin and swing the globes, watching their silhouettes eclipse images of plastic bottles and splintered wooden boards. The virtual reality experiences at Currents are the show’s biggest revelations. Virtual

advanced in leaps and bounds over the course of the festival’s existence, and this is its long-awaited moment. Visitors can don an Oculus Rift to soar through fleshy, glowing caverns in Graham Wakefield and universes offer endless adventures for the small price

that periodically fills to the brim with pulsating light.

of donning a silly headset. There’s so much content to

experience in this neon jungle that two people could

visit all the same corners of El Museo Cultural and

screens that visitors can play like an instrument by

In one corner of the show, an installation called

emerge from the darkness with completely different

moving throughout the tent. Most of the artifice is

hidden in thin beams that make up the cube’s skeleton.

a visitor’s heartbeat and displays it as a series of

The nonprofit new media festival, now in its

It’s an artwork that almost vanishes from existence

glowing circles on a large screen. After two minutes

sixth year, has grown up alongside the technologies

when dormant but seduces viewers like moths to a

of listening, the machine displays the closest rhythmic

that it showcases. For an exhibition that’s known for

match with another heartbeat in its ever-growing

its interactivity, this is by the far its most experiential

Through a spindly archway by local sculptor and

database. It’s a reminder that despite the dizzying

entry. It’s like going to a show of wet clay sculptures

possibilities at Currents, our experiences inevitably—

and gleefully leaving your fingerprints everywhere.

with activity. The crowd has been chattering about a

There’s something irresistible about an exhibition

that ripples with the slightest wave of your hand.

But for a few glitchy artworks hidden from view and

it. In Duty, seven people stand in a semicircle with bells in