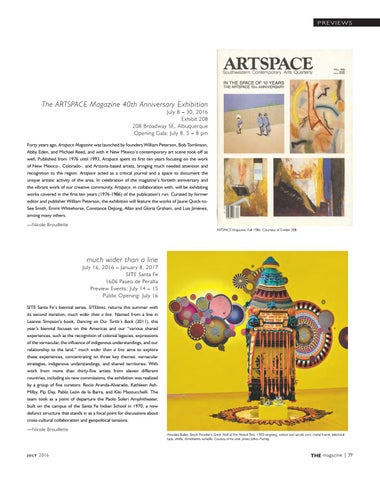 Forty years ago, Artspace Magazine was launched by founders William Peterson, Bob Tomlinson, Abby Eden, and Michael Reed, and with it New Mexico’s contemporary art scene took off as well. Published from 1976 until 1993, Artspace spent its first ten years focusing on the work of New Mexico-, Colorado-, and Arizona-based artists, bringing much needed attention and recognition to the region. Artspace acted as a critical journal and a space to document the unique artistic activity of the area. In celebration of the magazine’s fortieth anniversary and the vibrant work of our creative community, Artspace, in collaboration with, will be exhibiting works covered in the first ten years (1976-1986) of the publication’s run. Curated by former editor and publisher William Peterson, the exhibition will feature the works of Jaune Quick­-to­ See Smith, Emmi Whitehorse, Constance DeJong, Allan and Gloria Graham, and Luis Jiménez, among many others. —Nicole Brouillette ARTSPACE Magazine, Fall 1986. Courtesy of Exhibit 208.

much wider than a line

SITE Santa Fe’s biennial series, SITElines, returns this summer with its second iteration, much wider than a line. Named from a line in Leanne Simpson’s book, Dancing on Our Turtle’s Back (2011), this year’s biennial focuses on the Americas and our “various shared experiences, such as the recognition of colonial legacies, expressions of the vernacular, the influence of indigenous understandings, and our relationship to the land.” much wider than a line aims to explore these experiences, concentrating on three key themes: vernacular strategies, indigenous understandings, and shared territories. With work from more than thirty-five artists from eleven different countries, including six new commissions, the exhibition was realized by a group of five curators: Rocío Aranda­-Alvarado, Kathleen AshMilby, Pip Day, Pablo León de la Barra, and Kiki Mazzucchelli. The team took as a point of departure the Paolo Soleri Amphitheater, built on the campus of the Santa Fe Indian School in 1970, a now defunct structure that stands in as a focal point for discussions about cross-cultural collaboration and geopolitical tensions. —Nicole Brouillette Xenobia Bailey, Sistah Paradise’s Great Wall of Fire Revival Tent, 1993-ongoing, cotton and acrylic yarn, metal frame, electrical tape, shells, dimensions variable. Courtesy of the artist. photo: Jeffrey Machtig.