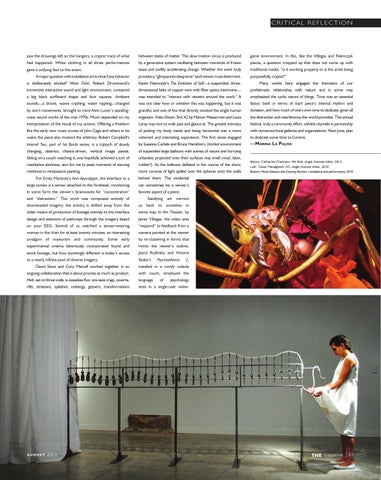 saw the drawings left on the hangers, a cryptic trace of what

between states of matter. This slow-motion circus is produced

game environment. In this, like the Villegas and Niemczyk

had happened. White clothing in all three performances

by a generative system oscillating between moments of frozen

pieces, a question cropped up that does not come up with

gave a unifying feel to the event.

stasis and swiftly accelerating change. Whether the work truly

traditional media: “is it working properly or is the artist being

A major question with installation art is what if any behavior

provides a “glimpse into deep time” each viewer must determine.

Many works here engaged the thematics of our

problematic relationship with nature and in some way

was intended to “interact with viewers around the work.” It

emphasized the cyclic nature of things. Time was an essential

was not clear how or whether this was happening, but it was

factor, both in terms of each piece’s internal rhythm and

graceful, and one of few that directly invoked the single human

duration, and how much of one’s own time to dedicate, given all

wave sound works of the mid-1970s. Much depended on my

the distraction and interference the world provides. This annual

interpretation of the result of my actions. Offering a freedom

Leray was nice to walk past and glance at. The greater intimacy

of putting my body inside and being horizontal was a more

with numerous local galleries and organizations. Next June, plan

to dedicate some time to Currents.

Interval Two, part of his Bardo series, is a triptych of slowly

of suspended large balloons with scenes of nature and hurrying

Sitting on a couch watching it, one hopefully achieved a sort of

urbanites projected onto their surfaces was smell (vinyl, latex,

meditative alertness, akin for me to peak moments of viewing

rubber?). As the balloons deflated in the course of the show,

more coronas of light spilled over the spheres onto the walls

For Emily Martinez’s Anti-Apocalypse, the interface to a

behind them. The incidental

large screen is a sensor attached to the forehead, monitoring

can sometimes be a viewer’s

in some form the viewer’s brainwaves for “concentration”

favorite aspect of a piece.

and “distraction.” This work was composed entirely of

downloaded imagery; the artistry is shifted away from the

us back to ourselves in

older means of production of footage entirely to the interface

some way. In Ant Theater, by

design and selection of pathways through the imagery based

on your EEG. Several of us watched a sensor-wearing

“respond” to feedback from a

woman in the chair for at least twenty minutes, an interesting

camera pointed at the viewer

amalgam of voyeurism and community. Some early

by re-clustering in forms that

stock footage, but how stunningly different is today’s access

to a nearly infinite pool of diverse imagery.

David Stout and Cory Metcalf worked together in an

installed in a comfy cubicle

ongoing collaboration that is about process as much as product.

with couch, employed the

tests in a single-user video-