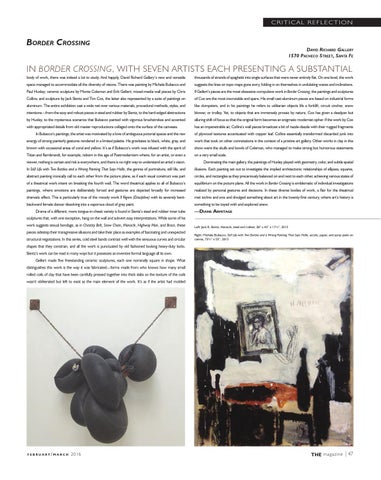 IN BORDER CROSSING, WITH SEVEN ARTISTS EACH PRESENTING A SUBSTANTIAL body of work, there was indeed a lot to study. And happily, David Richard Gallery’s new and versatile

thousands of strands of spaghetti into single surfaces that were never entirely flat. On one level, the work

space managed to accommodate all the diversity of visions. There was painting by Michele Bubacco and

suggests the lines on topo maps gone awry, folding in on themselves in undulating waves and inclinations.

If Gellert’s pieces are the most obsessive-compulsive work in Border Crossing, the paintings and sculptures

Collins; and sculpture by Jack Slentz and Tim Cox, the latter also represented by a suite of paintings on

of Cox are the most inscrutable and spare. His small cast-aluminum pieces are based on industrial forms

like dumpsters, and in his paintings he refers to utilitarian objects life a forklift, circuit cincher, snow

intentions—from the sexy and robust pieces in steel and rubber by Slentz, to the hard-edged abstractions

blower, or trolley. Yet, to objects that are immensely prosaic by nature, Cox has given a deadpan but

by Huxley, to the mysterious scenarios that Bubacco painted with vigorous brushstrokes and accented

alluring shift of focus so that the original form becomes an enigmatic modernist cipher. If the work by Cox

with appropriated details from old master reproductions collaged onto the surface of the canvases.

has an impenetrable air, Collins’s wall pieces broadcast a bit of razzle-dazzle with their rugged fragments

In Bubacco’s paintings, the artist was motivated by a love of ambiguous pictorial spaces and the raw

energy of strong painterly gestures rendered in a limited palette. He gravitates to black, white, gray, and

work that took on other connotations in the context of a pristine art gallery. Other works in clay in this

brown with occasional areas of coral and yellow. It’s as if Bubacco’s work was infused with the spirit of

show were the skulls and bowls of Coleman, who managed to make strong but humorous statements

Titian and Rembrandt, for example, reborn in the age of Postmodernism where, for an artist, or even a

on a very small scale.

viewer, nothing is certain and risk is everywhere, and there is no right way to understand an artist’s vision.

Dominating the main gallery, the paintings of Huxley played with geometry, color, and subtle spatial

In Still Life with Two Bottles and a Wrong Painting That Says Hallo, the genres of portraiture, still life, and

illusions. Each painting set out to investigate the implied architectonic relationships of ellipses, squares,

abstract painting ironically call to each other from the picture plane, as if each visual construct was part

circles, and rectangles as they precariously balanced on and next to each other, achieving various states of

of a theatrical work intent on breaking the fourth wall. The word theatrical applies to all of Bubacco’s

equilibrium on the picture plane. All the work in Border Crossing is emblematic of individual investigations

paintings, where emotions are deliberately forced and gestures are depicted broadly for increased

realized by personal gestures and decisions. In these diverse bodies of work, a flair for the theatrical

dramatic effect. This is particularly true of the moody work Il Rigore (Discipline) with its severely bent-

met techne and eros and divulged something about art in the twenty-first century, where art’s history is

something to be toyed with and explored anew.

sculptures that, with one exception, hang on the wall and subvert easy interpretations. While some of his work suggests sexual bondage, as in Chastity Belt, Snow Chain, Manacle, Highway Man, and Brace, these pieces sidestep their transgressive allusions and take their place as examples of fascinating and unexpected structural negotiations. In this series, cold steel bands contrast well with the sensuous curves and circular

shapes that they constrain, and all the work is punctuated by old fashioned looking heavy-duty locks. Slentz’s work can be read in many ways but it possesses an inventive formal language all its own. Gellert made five freestanding ceramic sculptures, each one nominally square in shape. What distinguishes this work is the way it was fabricated—forms made from who knows how many small rolled coils of clay that have been carefully pressed together into thick slabs so the texture of the coils wasn’t obliterated but left to exist as the main element of the work. It’s as if the artist had molded