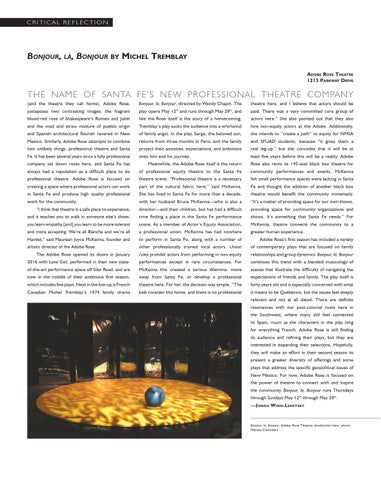 theatre here, and I believe that actors should be

paid. There was a very committed core group of

like the Rose itself is the story of a homecoming.

actors here.” She also pointed out that they also

and the mud and straw mixture of pueblo origin

Tremblay’s play sucks the audience into a whirlwind

of family angst. In the play, Serge, the beloved son,

she intends to “create a path” to equity for NMSA

returns from three months in Paris, and the family

and SFUAD students, because “it gives them a

project their anxieties, expectations, and ambitions

real leg-up,” but she concedes that it will be at

Fe. It has been several years since a fully professional

onto him and his journey.

least five years before this will be a reality. Adobe

company set down roots here, and Santa Fe has

Meanwhile, the Adobe Rose itself is the return

always had a reputation as a difficult place to do

of professional equity theatre to the Santa Fe

creating a space where professional actors can work

Fe and thought the addition of another black box

She has lived in Santa Fe for more than a decade,

theatre would benefit the community immensely.

work for the community.

with her husband Bruce McKenna—who is also a

“It’s a matter of providing space for our own shows,

“I think that theatre is a safe place to experience,

director—and their children, but has had a difficult

providing space for community organizations and

and it teaches you to walk in someone else’s shoes:

time finding a place in the Santa Fe performance

shows. It’s something that Santa Fe needs.” For

you learn empathy [and] you learn to be more tolerant

scene. As a member of Actor’s Equity Association,

McKenna, theatre connects the community to a

and more accepting. We’re all Blanche and we’re all

a professional union, McKenna has had nowhere

to perform in Santa Fe, along with a number of

artistic director of the Adobe Rose.

of contemporary plays that are focused on family

The Adobe Rose opened its doors in January

2016 with Luna Gail, performed in their new state-

performances except in rare circumstances. For

continues this trend with a blended musicology of

of-the-art performance space off Siler Road, and are

scenes that illustrate the difficulty of navigating the

now in the middle of their ambitious first season,

away from Santa Fe, or develop a professional

expectations of friends and family. The play itself is

which includes five plays. Next in the line-up is French

theatre here. For her, the decision was simple. “The

forty years old and is especially concerned with what

kids consider this home, and there is no professional

it means to be Québécois, but the issues feel deeply relevant and not at all dated. There are definite resonances with our post-colonial roots here in the Southwest, where many still feel connected to Spain, much as the characters in the play long for everything French. Adobe Rose is still finding its audience and refining their plays, but they are interested in expanding their selections. Hopefully, they will make an effort in their second season to present a greater diversity of offerings and some plays that address the specific geopolitical issues of New Mexico. For now, Adobe Rose is focused on the power of theatre to connect with and inspire the community. Bonjour, là, Bonjour runs Thursdays through Sundays May 12th through May 29th. —J onah W inn -L enetsky