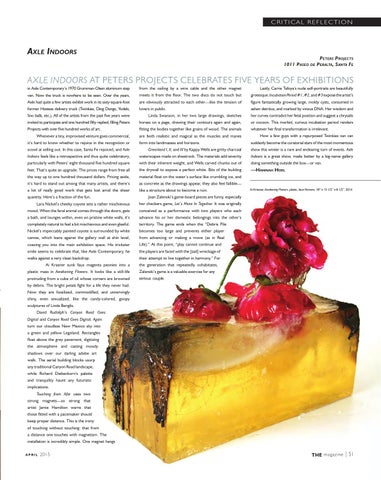 from the ceiling by a wire cable and the other magnet

van. Now the truck is nowhere to be seen. Over the years,

meets it from the floor. The two discs do not touch but

are obviously attracted to each other—like the tension of

ashen detritus, and marked by vinous DNA. Her wisdom and

Sno balls, etc.). All of the artists from the past five years were

her curves contradict her fetal position and suggest a chrysalis

invited to participate and one hundred fifty replied, filling Peters

horses on a page, drawing their contours again and again,

Projects with over five hundred works of art.

fitting the bodies together like grains of wood. The animals

whatever her final transformation is irrelevant.

Whenever a tiny, improvised venture goes commercial, it’s hard to know whether to rejoice in the recognition or

are both realistic and magical as the muscles and manes form into landmasses and horizons.

scowl at selling out. In this case, Santa Fe rejoiced, and Axle

Greenland I, II, and III by Kappy Wells are gritty charcoal

show this winter is a rare and endearing turn of events. Axle

Indoors feels like a retrospective and thus quite celebratory,

waterscapes made on sheetrock. The materials add severity

Indoors is a great show, made better by a big-name gallery

with their inherent weight, and Wells carved chunks out of

doing something outside the box—or van.

feet. That’s quite an upgrade. The prices range from free all

the drywall to expose a perfect white. Bits of the building

the way up to one hundred thousand dollars. Pricing aside,

material float on the water’s surface like crumbling ice, and

it’s hard to stand out among that many artists, and there’s

as concrete as the drawings appear, they also feel fallible—

quantity. Here’s a fraction of the fun.

her checkers game, Let’s Move In Together. It was originally

mood. When the feral animal comes through the doors, gets

conceived as a performance with two players who each

a bath, and lounges within, even on pristine white walls, it’s

advance his or her domestic belongings into the other’s

completely natural to feel a bit mischievous and even gleeful.

territory. The game ends when the “Debris Pile

becomes too large and prevents either player

canvas, which leans against the gallery wall at shin level,

from advancing or making a move (as in Real

coaxing you into the main exhibition space. His trickster

Life).” At this point, “play cannot continue and

smile seems to celebrate that, like Axle Contemporary, he

the players are faced with the [sad] wreckage of

walks against a very clean backdrop.

their attempt to live together in harmony.” For

the generation that repeatedly cohabitates,

plastic mass in Awakening Flowers. It looks like a still-life

Zalenski’s game is a valuable exercise for any

protruding from a cube of oil whose corners are browned

by debris. The bright petals fight for a life they never had. Now they are fossilized, commodified, and unnervingly shiny, even sexualized, like the candy-colored, goopy sculptures of Linda Benglis. David Rudolph’s Canyon Road Goes Digital and Canyon Road Goes Digital, Again turn our cloudless New Mexico sky into a green and yellow Legoland. Rectangles float above the grey pavement, digitizing the atmosphere and casting moody shadows over our darling adobe art walk. The aerial building blocks usurp any traditional Canyon Road landscape, while Richard Diebenkorn’s palette and tranquility haunt any futuristic implications. Touching from Afar uses two strong magnets—so strong that artist Jamie Hamilton warns that those fitted with a pacemaker should keep proper distance. This is the irony of touching without touching: that from a distance one touches with magnetism. The installation is incredibly simple. One magnet hangs APRIL