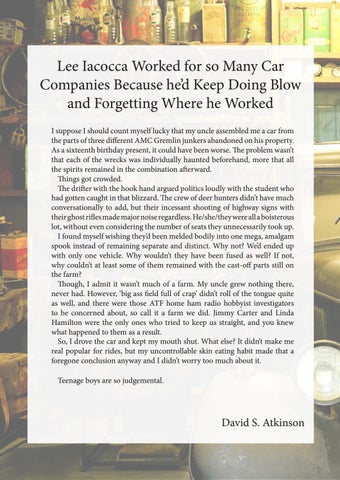 Lee Iacocca Worked for so Many Car Companies Because he’d Keep Doing Blow and Forgetting Where he Worked I suppose I should count myself lucky that my uncle assembled me a car from the parts of three different AMC Gremlin junkers abandoned on his property. As a sixteenth birthday present, it could have been worse. The problem wasn’t that each of the wrecks was individually haunted beforehand, more that all the spirits remained in the combination afterward. Things got crowded. The drifter with the hook hand argued politics loudly with the student who had gotten caught in that blizzard. The crew of deer hunters didn’t have much conversationally to add, but their incessant shooting of highway signs with their ghost rifles made major noise regardless. He/she/they were all a boisterous lot, without even considering the number of seats they unnecessarily took up. I found myself wishing they’d been melded bodily into one mega, amalgam spook instead of remaining separate and distinct. Why not? We’d ended up with only one vehicle. Why wouldn’t they have been fused as well? If not, why couldn’t at least some of them remained with the cast-off parts still on the farm? Though, I admit it wasn’t much of a farm. My uncle grew nothing there, never had. However, ‘big ass field full of crap’ didn’t roll of the tongue quite as well, and there were those ATF home ham radio hobbyist investigators to be concerned about, so call it a farm we did. Jimmy Carter and Linda Hamilton were the only ones who tried to keep us straight, and you knew what happened to them as a result. So, I drove the car and kept my mouth shut. What else? It didn’t make me real popular for rides, but my uncontrollable skin eating habit made that a foregone conclusion anyway and I didn’t worry too much about it. Teenage boys are so judgemental.

flash & cinder issue one: spirit, featuring the works of many talented writers and wonderful interviewees. 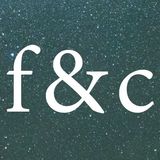