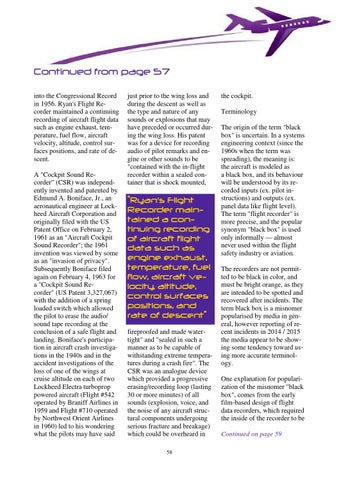 Continued from page 57 into the Congressional Record in 1956. Ryan's Flight Recorder maintained a continuing recording of aircraft flight data such as engine exhaust, temperature, fuel flow, aircraft velocity, altitude, control surfaces positions, and rate of descent. A "Cockpit Sound Recorder” (CSR) was independently invented and patented by Edmund A. Boniface, Jr., an aeronautical engineer at Lockheed Aircraft Corporation and originally filed with the US Patent Office on February 2, 1961 as an "Aircraft Cockpit Sound Recorder"; the 1961 invention was viewed by some as an "invasion of privacy". Subsequently Boniface filed again on February 4, 1963 for a "Cockpit Sound Recorder" (US Patent 3,327,067) with the addition of a spring loaded switch which allowed the pilot to erase the audio/ sound tape recording at the conclusion of a safe flight and landing. Boniface's participation in aircraft crash investigations in the 1940s and in the accident investigations of the loss of one of the wings at cruise altitude on each of two Lockheed Electra turboprop powered aircraft (Flight #542 operated by Braniff Airlines in 1959 and Flight #710 operated by Northwest Orient Airlines in 1960) led to his wondering what the pilots may have said

just prior to the wing loss and during the descent as well as the type and nature of any sounds or explosions that may have preceded or occurred during the wing loss. His patent was for a device for recording audio of pilot remarks and engine or other sounds to be "contained with the in-flight recorder within a sealed container that is shock mounted,

“Ryan's Flight Recorder maintained a continuing recording of aircraft flight data such as engine exhaust, temperature, fuel flow, aircraft velocity, altitude, control surfaces positions, and rate of descent” fireproofed and made watertight" and "sealed in such a manner as to be capable of withstanding extreme temperatures during a crash fire". The CSR was an analogue device which provided a progressive erasing/recording loop (lasting 30 or more minutes) of all sounds (explosion, voice, and the noise of any aircraft structural components undergoing serious fracture and breakage) which could be overheard in 58

the cockpit. Terminology The origin of the term "black box" is uncertain. In a systems engineering context (since the 1960s when the term was spreading), the meaning is: the aircraft is modeled as a black box, and its behaviour will be understood by its recorded inputs (ex. pilot instructions) and outputs (ex. panel data like flight level). The term "flight recorder" is more precise, and the popular synonym "black box" is used only informally — almost never used within the flight safety industry or aviation. The recorders are not permitted to be black in color, and must be bright orange, as they are intended to be spotted and recovered after incidents. The term black box is a misnomer popularised by media in general, however reporting of recent incidents in 2014 / 2015 the media appear to be showing some tendency toward using more accurate terminology. One explanation for popularization of the misnomer "black box", comes from the early film-based design of flight data recorders, which required the inside of the recorder to be Continued on page 59