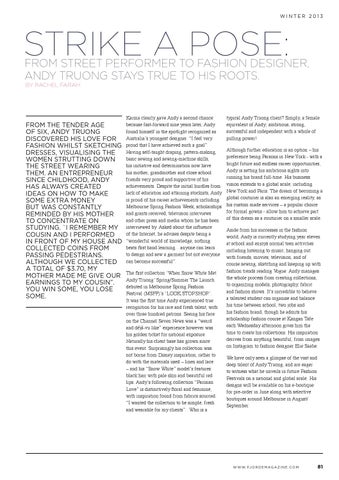 FROM STREET PERFORMER TO FASHION DESIGNER, ANDY TRUONG STAYS TRUE TO HIS ROOTS. BY RACHEL FARAH

FROM THE TENDER AGE OF SIX, ANDY TRUONG DISCOVERED HIS LOVE FOR FASHION WHILST SKETCHING DRESSES, VISUALISING THE WOMEN STRUTTING DOWN THE STREET WEARING THEM. AN ENTREPRENEUR SINCE CHILDHOOD, ANDY HAS ALWAYS CREATED IDEAS ON HOW TO MAKE SOME EXTRA MONEY BUT WAS CONSTANTLY REMINDED BY HIS MOTHER TO CONCENTRATE ON STUDYING. `I REMEMBER MY COUSIN AND I PERFORMED IN FRONT OF MY HOUSE AND COLLECTED COINS FROM PASSING PEDESTRIANS. ALTHOUGH WE COLLECTED A TOTAL OF $3.70, MY MOTHER MADE ME GIVE OUR EARNINGS TO MY COUSIN”. YOU WIN SOME, YOU LOSE SOME.

Karma clearly gave Andy a second chance because fast-forward nine years later, Andy found himself in the spotlight recognized as Australia’s youngest designer. “I feel very proud that I have achieved such a goal”. Having self-taught draping, pattern-making, basic sewing and sewing-machine skills, his initiative and determination now have his mother, grandmother and close school friends very proud and supportive of his achievements. Despite the initial hurdles from lack of education and attaining stockists, Andy is proud of his career achievements including Melbourne Spring Fashion Week, scholarships and grants received, television interviews and other press and media whom he has been interviewed by. Asked about the influence of the Internet, he advises despite being a “wonderful world of knowledge, nothing beats first hand learning…anyone can learn to design and sew a garment but not everyone can become successful”. The first collection ‘When Snow White Met Andy Truong’ Spring/Summer The Launch debuted in Melbourne Spring Fashion Festival (MSFF)’s ‘LOOK.STOP.SHOP.’. It was the first time Andy experienced true recognition for his rare and fresh talent, with over three hundred patrons. Seeing his face on the Channel Seven News was a “weird and déjà-vu like” experience however was his golden ticket for national exposure. Naturally his client base has grown since this event. Surprisingly his collection was not borne from Disney inspiration, rather to do with the materials used – linen and lace – and his “Snow White” model’s features: black hair with pale skin and beautiful red lips. Andy’s following collection “Parisian Love” is distinctively floral and feminine, with inspiration found from fabrics sourced. “I wanted the collection to be simple, fresh and wearable for my clients”. Who is a

typical Andy Truong client? Simply, a female equivalent of Andy; ambitious, strong, successful and independent with a whole of pulling power! Although further education is an option – his preference being Parsons in New York - with a bright future and endless career opportunities, Andy is setting his ambitious sights into running his brand full-time. His business vision extends to a global scale, including New York and Paris. The dream of becoming a global couturier is also an emerging reality, as his custom made services – a popular choice for formal gowns - allow him to achieve part of this dream as a couturier on a smaller scale. Aside from his successes in the fashion world, Andy is currently studying year eleven at school and enjoys normal teen activities including listening to music, hanging out with friends, movies, television, and of course sewing, sketching and keeping up with fashion trends reading Vogue. Andy manages the whole process from creating collections, to organizing models, photography, fabric and fashion shows. It’s incredible to believe a talented student can organise and balance his time between school, two jobs and his fashion brand, though he admits his scholarship fashion course at Kangan Tafe each Wednesday afternoon gives him the time to create his collections. His inspiration derives from anything beautiful; from images on Instagram to fashion designer Elie Saabe. We have only seen a glimpse of the vast and deep talent of Andy Truong, and are eager to witness what he unveils in future Fashion Festivals on a national and global scale. His designs will be available on his e-boutique for pre-order in June along with selective boutiques around Melbourne in August/ September. 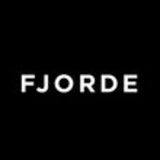