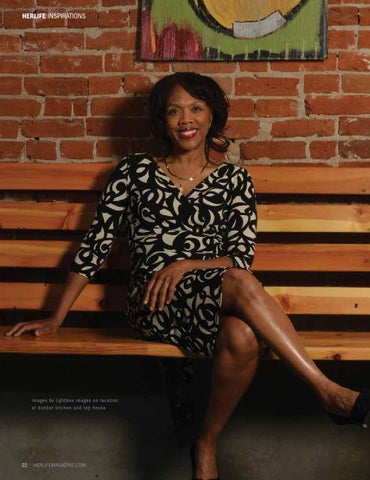 racy Winchester is no stranger to hard

job, as if it were expressly, or perhaps even di-

work, effecting change and making a

vinely, created for her. Driven and ambitious since

positive impact on the community in

she was a young girl, Tracy has always been a

which she lives. Her stellar résumé

goal setter. “When I was in college, I was a double

major in political science and communications,”

Tracy recalled. She earned her undergraduate

degree from Boston College in 1977 at a time

legal experience and a cornucopia of honors and

when cable television was rearing its head into

awards. However, upon first meeting her, you

quickly realize that she is also a stranger to ego

and arrogance and instead embraces a genuine,

she also had a strong penchant for politics and

running for office. She understood that commu-

that makes you feel right at home with her.

nication goes hand in hand with being politically

In her role as Executive Director of the Five

involved. “I love being the voice of the voiceless,”

she emphasized. “I love to advocate for those

ness District, which she assumed in 2011, this

who cannot do so for themselves.”

As a child of the Civil Rights Movement, her

asm for all of the exciting developments that are

tance of articulating to the world the injustices

re-igniting this high-profile and historic neighbor-

you see. She was taught to speak her mind and

enjoy the results in a positive and productive

by that would make even the movies jealous.

manner. “My dad supported my desire to rep-

Despite the depth and substance of her po-

resent people with my voice, but he also said I

sition, Tracy remains surprisingly at ease in this

should have a solid background, go to law school,

and advocate for civil rights,” she said. “It was through the communications aspect of my goals that I saw an opportunity to shape positive images. It is one thing to pass laws, but it is another thing to shape cultures.” To that end, Tracy got her political feet wet by working for U.S. Senator Edward W. Brooke (RMA) as the assistant to the press secretary on media-related matters shortly after finishing her undergraduate work. She spent the next several years on Capitol Hill in Washington, D.C., earning her political stripes by working for Congressman Julian Dixon (D-CA), with the Congressional Black Caucus, and with the U.S. House of Representatives Finance Office while simultaneously earning her law degree. Subsequent to completing law school, Tracy worked as a law clerk for the NAACP Legal Defense Fund, clerked for a couple of esteemed law firms and ultimately became a research assistant at Georgetown University Law Center until the mid-1980s, when the opportunity to segue into the communications arena knocked on her door. She packed her bags and headed west to Denver, where she initially started as a Walter Kaitz Foundation fellow and then worked her way up to a position with Jones Intercable, Inc., in 1995 as director of product management. After more than a decade at that company, Tracy became the regional director of Affiliate Sales and Relations for the ABC Family Channel, formerly the Fox Family Channel. By 1999, as then President and CEO of CoLours Television, the multicultural network, Tracy seized the opportunity to positively promote the African-American culture. This endeavor reached a subscriber level of 17 million satellite and cable TV households within the next ten years. As with many companies in the second decade of the twenty-first century, the recession wreaked fiscal havoc on CoLours, forcing it to close its doors. In the process, another door opened for Tracy, one that allowed her to cross the threshold into the commercial redevelopment field. “I love to build things from the ground up,

WE HAVE A VISION, A PLAN AND

and when the opportunity to work with Five Points

became available, I saw it as a great way to focus on the African-American culture and history and

all the positive contributions they made in the West,” she smiled.

A STRATEGY TO BRING A COMMUNITY TOGETHER,” SAID TRACY. “WE WANT THIS TO BE A DESTINATION FOR ARTS, CULTURE AND ENTERTAINMENT, SHOWCASING DENVER’S

Nestled in a ten-block corridor along Welton

Street on the northeast edge of downtown Den-

a strong revitalization in recent months, thanks to

its cool urban location, its rich cultural history and access to light rail. If ever there were the hot spot in town, this most definitely is it. Tracy’s voice, peppered with obvious enthusiasm for her work and this project, beauti-

fully articulated how this area at first caught her eye, but has now captured her heart. “What we are striving to preserve here is the rich culture, preserving the past while also bringing in new

BUSINESSES WHILE BRINGING IN NEW ONES AND WORKING WITH EVERYONE–RESIDENTS, DEVELOPERS,

THE CITY, NON-PROFITS AND STAKEHOLDERS–TO SUPPORT THIS VISION FOR THE CORRIDOR.”

services and goods to support the surrounding neighborhoods,” she noted. She elaborated that they are focused on business development, cul-

completely devoted to being a mom, which was

tural promotion and preservation, and the greater

eschewing the suburban lifestyle in favor of liv-

actually her first goal in life, but that came later

good, which translates not only to economic de-

ing, working and playing in the city. “That is who

rather than sooner. “I got married at 46 and had

velopment but also to education, transportation,

we have attracted,” stated Tracy, who noted that

tino. “The demographics have changed, but we

ter where people lived, worked and played. When

still have this marvelous opportunity to keep the

active in her community by serving on multiple

the United States banks redlined in the 1960s,

neighborhood and restore its glory days.”

boards, including the Saint Francis Homeless

mortgages were not readily accessible to the

According to Tracy, within the last year Five

Points has realized $150 million in development

Denver Metro Chamber of Commerce and the

forced them to move out. Unfortunately, by the

projects and a multitude of projects are still

Downtown Denver Partnership, Inc., among many

on the horizon. “We have a vision, a plan and

a strategy to bring a community together,” said

As she sets her gaze on the future, she sees

ple wanted to leave the suburbs and move back

Tracy. “We want this to be a destination for arts,

herself involved with public service and giving

into the city. The idea to restore and revitalize

back to the community in any capacity she can.

such an integral part of Denver’s history began

“My parents taught me to work hard and always

to realize a pulse that has since led to a strongly

give back,” she reflected.

businesses while bringing in new ones and work-

ing with everyone–residents, developers, the City,

non-profits and stakeholders–to support this vi-

a small town to the big leagues,” Tracy beamed.

sion for the corridor.”

“The baseball stadium is actually in Five Points.”

When not immersed in the passion for her

What has energized this area now are the Mille-

work, Tracy relishes her personal time and is

Sometimes, it seems the best sermons in life are clearly lived, not preached. HLM For more information on Tracy and on the Five Points Business District, go online at fivepointsbiz.org.