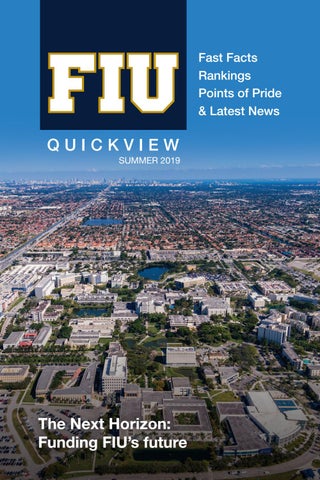 Top of the class Nine FIU graduate programs are ranked among the top 50 at U.S. public universities, according to U.S. News & World Report. MBA #4 International (College of Business)

Research strength reaffirmed FIU has retained its status as one of the nationâ&#x20AC;&#x2122;s top research universities. The Carnegie Classification of Institutions of Higher Education has recognized FIUâ&#x20AC;&#x2122;s continued high research activity and its place among the fewer than 3 percent of 4,665 universities that can be called Research I. FIUâ&#x20AC;&#x2122;s research innovation has resulted in a 650 percent increase in patents over the last few years and a record $196 million invested in research activity in 2017-2018. The university has made a concerted effort over the last decade to hire teams that together have made breakthroughs in areas such as childhood mental health and hurricane mitigation.

Report outlines Miami’s HQ potential The College of Communication, Architecture + The Arts has issued a report through its Miami Urban Future Initiative that addresses key components to attracting large, multinational corporations to the region. The goal, says urbanist Richard Florida, whose Creative Class worked with FIU on the study, is not only to lure existing companies to South Florida but to help build promising nascent companies with the potential to go big. Miami’s selection as one of 20 finalists (from the 238 cities that applied) to host Amazon’s second headquarters reflects the strides the area has made in being recognized as more than just a vacation spot. Among the recommendations to business and civic leaders: invest more in research universities and education as well as the region’s startup ecosystem, and leverage South Florida’s role as a gateway to Latin America.

Funding FIU’s future Next Horizon: The Campaign for FIU is ensuring that Miami’s only public research university continues to offer high-quality education, support the aspirations of young people with scholarships, attract faculty who conduct ground-breaking research and meet a variety of community needs through public-private partnerships. The $750 million effort was announced during a kickoff event in early 2019, when nearly $480 million had already been raised. “The Next Horizon is going to change the face of this institution,” said Howard Lipman, CEO of the FIU Foundation. “The campaign seeks investments in FIU’s big ideas, in its areas of greatest potential and in its future. Look how far we’ve come in just a little more than 50 years. Imagine where we can go from here. Our donor partners are taking FIU to its next horizon.”

“State of the World” addresses foreign policy issues The Steven J. Green School of International & Public Affairs welcomed an audience of 300 to its 2019 State of the World conference. The two-day gathering featured more than 30 of the nation’s leading experts in foreign policy and global affairs, including several former ambassadors and advisors to Presidents Reagan, Bush, Clinton, Obama and Trump. State of the World panelists traveled from as far away as the countries of Lithuania and Georgia. Panels covered topics such as immigration, the Middle East and threats to democracy worldwide as well as the release of FIU’s 2018 Cuba Poll, the longest running research project measuring Cuban-American public opinion.

Improving victimsâ&#x20AC;&#x2122; access to care A $1.5 million grant from the U.S. Health Resources and Services Administration will allow the Nicole Wertheim College of Nursing & Health Sciences to increase the number of forensic nurse specialists available to victims of rape in efforts to improve both treatment and the prosecution rates of such crimes. â&#x20AC;&#x153;[Such] nurses are on the frontline to treat survivors compassionately with the physical and emotional support they need, while assisting the legal system in their efforts to bring the criminal perpetrators to justice,â&#x20AC;? said Tami Thomas, associate dean of research for the college. The program will train upwards of 30 nurses at clinics in Hendry, Glades, Palm Beach and Miami-Dade counties. Florida currently has only 44 certified sexual assault nurse examiners for a state in which reportedly more than a quarter of its population has experienced sexual assault.

Examining health effects of Colombian river contamination The Robert Stempel College of Public Health & Social Work, in collaboration with two universities in Colombia, has been awarded a $3 million grant to evaluate contamination in that country’s river basin and how it is impacting local health. The FIU portion of the project will be led by Carlos Espinal, director of the Global Health Consortium; Piero R. Gardinali, a marine environmental toxicologist and professor in the College of Arts, Sciences & Education; and Tomás R. Guilarte, dean of Stempel College. The project is being funded by a Colombian government agency and relates to environmental contaminants resulting from both legal and illegal gold mining. “The people who live in the Atrato River Basin have been exposed to decades of mercury contamination in their daily lives, and the effects will be felt for generations to come,” Guilarte said. “Our hope is that by understanding the levels of contamination and where it exists, we can be part of the solution and alleviate some of the damage that has been caused.”

Trump campus visit highlights Venezuelan turmoil President Donald Trump visited the university in early 2019 to condemn the humanitarian crisis in Venezuela and declare support for its people. At FIU, where more than 1,900 students identify as Venezuelan, many are doing whatever they can for their desperate homeland. A dietetics professor has spearheaded an ongoing campaign to collect baby formula to combat food shortages that have led to rising infant mortality. Members of the Venezuelan Student Alliance have collaborated with an NGO to hold fundraising activities in support of projects such as a supplemental-nutrition facility for children. Students in the College of Engineering & Computing have raised funds to truck clean water to hospitals and childrenâ&#x20AC;&#x2122;s charities in the wake of blackouts that downed electric-powered filtration systems.

Institute welcomes high-level expert The Institute of Water and Environment represents one of the largest collaboratives of faculty and students associated with water and environmental science in the United States. From the wetlands of the Everglades to the worldâ&#x20AC;&#x2122;s oceans, institute researchers are helping to preserve fragile freshwater and marine resources for future generations. The institute comprises several centers, among them the Southeast Environmental Research Center, the Center for Coastal Oceans Research and the NSF-funded Center of Excellence on aquatic chemistry and ecotoxicology, and others. It also includes the Sea Level Solutions Center, which in 2018 named a new director. Jayantha Obeysekera now leads the research, education and outreach hub that develops and implements solutions for impacts caused by rising seas. The civil engineer previously had a leading role with the South Florida Water Management District and worked on restoration projects related to the Everglades and Kissimmee River. He served on the federal advisory committee that directed the development of the 2014 National Climate Assessment as well as other national panels and a working group associated with the Department of Defense.

Workforce development for the construction industry The Moss School of Construction, Infrastructure and Sustainability, within the College of Engineering & Computing, and the Lennar Foundation have partnered to offer no-cost skills training to those eager to better their lives. The 12-week certificate program on construction trades includes classroom instruction and hands-on experience and has attracted unemployed and underemployed individuals seeking entry-level opportunities as construction workers. Within Florida, construction ranks among the top industries for well-paying jobs that do not require a bachelorâ&#x20AC;&#x2122;s degree, with an average annual salary of $52,000. The state expects to grow its current 141,000 construction jobs by 12 percent within the next several years.

Colleges and schools including Medicine and Law

Ashoka Changemaker Campuses in the world, including FIU 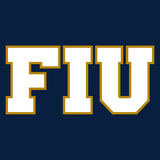