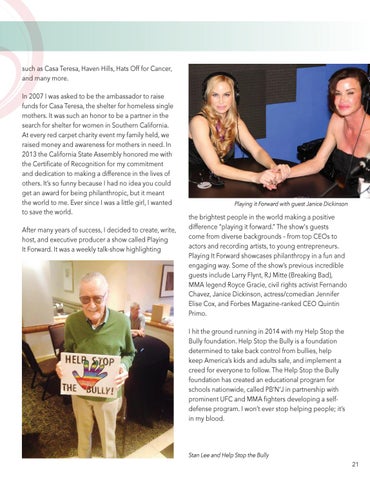 such as Casa Teresa, Haven Hills, Hats Off for Cancer, and many more. In 2007 I was asked to be the ambassador to raise funds for Casa Teresa, the shelter for homeless single mothers. It was such an honor to be a partner in the search for shelter for women in Southern California. At every red carpet charity event my family held, we raised money and awareness for mothers in need. In 2013 the California State Assembly honored me with the Certificate of Recognition for my commitment and dedication to making a difference in the lives of others. It’s so funny because I had no idea you could get an award for being philanthropic, but it meant the world to me. Ever since I was a little girl, I wanted to save the world. After many years of success, I decided to create, write, host, and executive producer a show called Playing It Forward. It was a weekly talk-show highlighting

the brightest people in the world making a positive difference “playing it forward.” The show&#39;s guests come from diverse backgrounds – from top CEOs to actors and recording artists, to young entrepreneurs. Playing It Forward showcases philanthropy in a fun and engaging way. Some of the show’s previous incredible guests include Larry Flynt, RJ Mitte (Breaking Bad), MMA legend Royce Gracie, civil rights activist Fernando Chavez, Janice Dickinson, actress/comedian Jennifer Elise Cox, and Forbes Magazine-ranked CEO Quintin Primo. I hit the ground running in 2014 with my Help Stop the Bully foundation. Help Stop the Bully is a foundation determined to take back control from bullies, help keep America’s kids and adults safe, and implement a creed for everyone to follow. The Help Stop the Bully foundation has created an educational program for schools nationwide, called PB’N’J in partnership with prominent UFC and MMA fighters developing a selfdefense program. I won’t ever stop helping people; it’s in my blood.

Obtain insights from experts on how to improve your mood and immunity and what to do to restore your energy and balance. Our double cover model, celebrity and CEO Christina Fulton, shares secrets and insights on slowing down the way we age, foods we ought to have in our diet and success tips on entrepreneurship, motherhood and philanthropy. 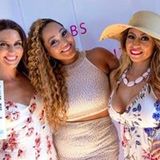