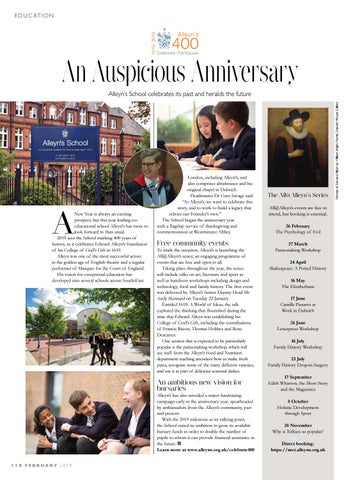 New Year is always an exciting prospect, but this year leading coeducational school Alleyn’s has more to look forward to than usual. 2019 sees the School marking 400 years of history, as it celebrates Edward Alleyn’s foundation of his College of God’s Gift in 1619. Alleyn was one of the most successful actors in the golden age of English theatre and a regular performer of Masques for the Court of England. His vision for exceptional education has developed into several schools across South-East

London, including Alleyn’s, and also comprises almshouses and his original chapel in Dulwich. Headmaster Dr Gary Savage said: “At Alleyn’s, we want to celebrate this story, and to work to build a legacy that echoes our Founder’s own.” The School began the anniversary year with a flagship service of thanksgiving and commemoration at Westminster Abbey.

Free community events To mark the occasion, Alleyn’s is launching the All@Alleyn’s series; an engaging programme of events that are free and open to all. Taking place throughout the year, the series will include talks on art, literature and sport as well as hands-on workshops including design and technology, food and family history. The first event was delivered by Alleyn’s Senior Deputy Head Mr Andy Skinnard on Tuesday 22 January. Entitled 1619: A World of Ideas, the talk explored the thinking that flourished during the time that Edward Alleyn was establishing his College of God’s Gift, including the contributions of Francis Bacon, Thomas Hobbes and Rene Descartes. One session that is expected to be particularly popular is the pasta-making workshop, which will see staff from the Alleyn’s Food and Nutrition department teaching attendees how to make fresh pasta, recognise some of the many different varieties, and use it as part of delicious seasonal dishes.

An ambitious new vision for bursaries Alleyn’s has also unveiled a major fundraising campaign early in the anniversary year, spearheaded by ambassadors from the Alleyn’s community, past and present. With the 2019 milestone as its rallying point, the School stated its ambition to grow its available bursary funds in order to double the number of pupils to whom it can provide financial assistance in the future. Learn more at www.alleyns.org.uk/celebrate400 118 FEBRUARY 2019

Alleyn’s School celebrates its past and heralds the future 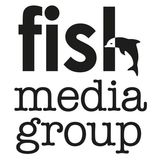