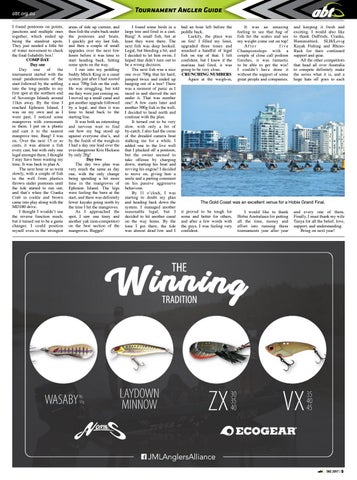 I found pontoons on points, junctions and multiple ones together, which ended up being the standout spots. They just needed a little bit of water movement to check the final fishabilty box! COMP DAY Day one Day one of the tournament started with the usual pandemonium of the start followed by the settling into the long peddle to my first spot at the northern end of Sovereign Islands around 11km away. By the time I reached Ephraim Island, I was on my own and as I went past, I noticed some mangroves with cormorants in them. I put on a plastic and cast it to the nearest mangrove tree. Bang! I was on. Over the next 15 or so casts, it was almost a fish every cast, but with only one legal amongst them, I thought I may have been wasting my time. It was back to plan A. The next hour or so went slowly, with a couple of fish in the well from plastics thrown under pontoons until the tide started to run out, and that’s when the Cranka Crab in cockle and brown came into play along with the MD180 drive. I thought I wouldn’t use the reverse function much, but it turned out to be a game changer. I could position myself even in the strongest

abt.org.au areas of tide up current, and then fish the crabs back under the pontoons and boats. I quickly got my last fish, and then a couple of small upgrades over the next few hours before it was time to start heading back, hitting some spots on the way. I ran into my peddling buddy Mitch King in a canal system just after I had scored a nice 700g fish on the crab. He was struggling, but told me they were just coming on. I moved up a small canal and got another upgrade followed by a legal, and then it was time to head back to the starting line. It was both an interesting and nervous wait to find out how my bag stood up against everyone else’s, and by the finish of the weigh-in I had a day one lead over the ever-dangerous Kris Hickson by only 20g! Day two The day two plan was very much the same as day one, with the only change being spending a bit more time in the mangroves of Ephraim Island. The legs were feeling the burn at the start, and there was definitely fewer kayaks going north by the time I hit the mangroves. As I approached the spot, I saw one tinny and another yak (non-competitor) on the best section of the mangroves. Bugger!

I found some birds in a large tree and fired in a cast. Bang! A small fish, but at least they were there. The next fish was deep hooked. Legal, but bleeding a bit, and I decided to let him swim. I hoped that didn’t turn out to be a wrong decision. The next fish was a nice one over 700g that hit hard, jumped twice and ended up hanging out of a tree! There was a moment of panic as I raced in and shoved the net under it. That was number one! A few casts later and another 500g fish in the well, I decided to head north and continue with the plan. It turned out to be very slow, with only a bit of by-catch. I also had the curse of the dreaded camera boat stalking me for a while. I added one to the live well that I plucked off a pontoon, but the owner seemed to take offense by charging down, starting his boat and revving his engine! I decided to move on, giving him a smile and a parting comment on his passive aggressive behaviour. By 11 o’clock, I was starting to doubt my plan and heading back down the system. I managed another reasonable legal, but I decided to hit another canal on the way home. By the time I got there, the tide was almost dead low and I

had an hour left before the peddle back. Luckily, the place was on fire! I filled my limit, upgraded three times and smacked a handful of legal fish on top of that. I felt confident, but I knew if the marinas had fired, it was going to be very close. CRUNCHING NUMBERS Again at the weigh-in,

It was an amazing feeling to see that bag of fish hit the scales and see my weight come out on top! After five Championships with a couple of close call podium finishes, it was fantastic to be able to get the win! I couldn’t have done it without the support of some great people and companies.

and keeping it fresh and exciting. I would also like to thank Duffrods, Cranka, Humminbird, SLH/Lovig Kayak Fishing and RhinoRack for their continued support and gear. All the other competitors that head all over Australia to compete definitely make the series what it is, and a huge hats off goes to each

The Gold Coast was an excellent venue for a Hobie Grand Final. it proved to be tough for some and better for others, and after a few words with the guys, I was feeling very confident.

I would like to thank Hobie Australasia for putting all the time, money and effort into running these tournaments year after year

and every one of them. Finally, I must thank my wife Tanya for all the belief, love, support, and understanding. Bring on next year! 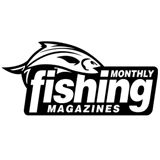