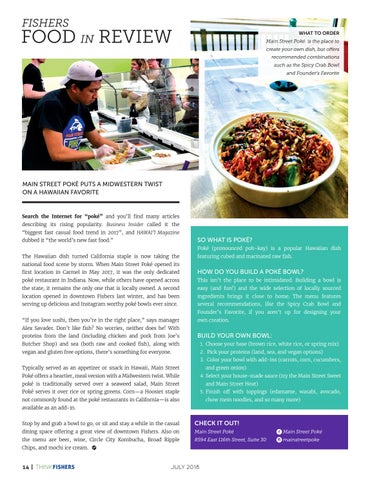 WHAT TO ORDER Main Street Poké is the place to create your own dish, but offers recommended combinations such as the Spicy Crab Bowl and Founder’s Favorite

Search the Internet for “poké” and you’ll find many articles describing its rising popularity. Business Insider called it the “biggest fast casual food trend in 2017”, and HAWAI’I Magazine

SO WHAT IS POKÉ?

national food scene by storm. When Main Street Poké opened its first location in Carmel in May 2017, it was the only dedicated

HOW DO YOU BUILD A POKÉ BOWL?

poké restaurant in Indiana. Now, while others have opened across

This isn’t the place to be intimidated. Building a bowl is

the state, it remains the only one that is locally owned. A second

easy (and fun!) and the wide selection of locally sourced

location opened in downtown Fishers last winter, and has been

ingredients brings it close to home. The menu features

serving up delicious and Instagram worthy poké bowls ever since.

several recommendations, like the Spicy Crab Bowl and Founder’s Favorite, if you aren’t up for designing your

“If you love sushi, then you’re in the right place,” says manager

Alex Savader. Don’t like fish? No worries, neither does he! With proteins from the land (including chicken and pork from Joe’s

BUILD YOUR OWN BOWL:

Butcher Shop) and sea (both raw and cooked fish), along with

1. Choose your base (brown rice, white rice, or spring mix)

vegan and gluten free options, there’s something for everyone.

Typically served as an appetizer or snack in Hawaii, Main Street

Poké offers a heartier, meal version with a Midwestern twist. While

poké is traditionally served over a seaweed salad, Main Street

not commonly found at the poké restaurants in California—is also

chow mein noodles, and so many more)

available as an add-in. Stop by and grab a bowl to go, or sit and stay a while in the casual 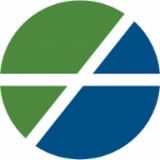