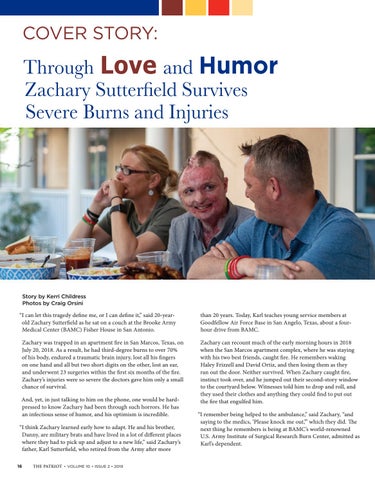 “I can let this tragedy define me, or I can define it,” said 20-yearold Zachary Sutterfield as he sat on a couch at the Brooke Army Medical Center (BAMC) Fisher House in San Antonio. Zachary was trapped in an apartment fire in San Marcos, Texas, on July 20, 2018. As a result, he had third-degree burns to over 70% of his body, endured a traumatic brain injury, lost all his fingers on one hand and all but two short digits on the other, lost an ear, and underwent 23 surgeries within the first six months of the fire. Zachary’s injuries were so severe the doctors gave him only a small chance of survival. And, yet, in just talking to him on the phone, one would be hardpressed to know Zachary had been through such horrors. He has an infectious sense of humor, and his optimism is incredible. “I think Zachary learned early how to adapt. He and his brother, Danny, are military brats and have lived in a lot of different places where they had to pick up and adjust to a new life,” said Zachary’s father, Karl Sutterfield, who retired from the Army after more 16

than 20 years. Today, Karl teaches young service members at Goodfellow Air Force Base in San Angelo, Texas, about a fourhour drive from BAMC. Zachary can recount much of the early morning hours in 2018 when the San Marcos apartment complex, where he was staying with his two best friends, caught fire. He remembers waking Haley Frizzell and David Ortiz, and then losing them as they ran out the door. Neither survived. When Zachary caught fire, instinct took over, and he jumped out their second-story window to the courtyard below. Witnesses told him to drop and roll, and they used their clothes and anything they could find to put out the fire that engulfed him. “I remember being helped to the ambulance,” said Zachary, “and saying to the medics, ‘Please knock me out,’” which they did. The next thing he remembers is being at BAMC’s world-renowned U.S. Army Institute of Surgical Research Burn Center, admitted as Karl’s dependent.