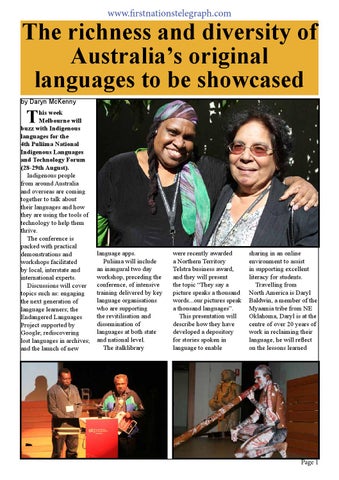 his week Melbourne will buzz with Indigenous languages for the 4th Puliima National Indigenous Languages and Technology Forum (28-29th August). Indigenous people from around Australia and overseas are coming together to talk about their languages and how they are using the tools of technology to help them thrive. The conference is packed with practical demonstrations and workshops facilitated by local, interstate and international experts. Discussions will cover topics such as: engaging the next generation of language learners; the Endangered Languages Project supported by Google; rediscovering lost languages in archives; and the launch of new

language apps. Puliima will include an inaugural two day workshop, preceding the conference, of intensive training delivered by key language organisations who are supporting the revitilisation and dissemination of languages at both state and national level. The italklibrary

were recently awarded a Northern Territory Telstra business award, and they will present the topic “They say a picture speaks a thousand words...our pictures speak a thousand languages”. This presentation will describe how they have developed a depository for stories spoken in language to enable

sharing in an online environment to assist in supporting excellent literacy for students. Travelling from North America is Daryl Baldwin, a member of the Myaamia tribe from NE Oklahoma, Daryl is at the centre of over 20 years of work in reclaiming their language, he will reflect on the lessons learned

and focus on the essential elements of research, education and community support. Daryn McKenny is manager of the Miromaa Aboriginal Language and Technology Centre in Newcastle, which coordinates the forum. Daryn believes that there needs to be a wide range of approaches to both conservation and teaching because the language situation varies so much in the different parts of Australia. â&#x20AC;&#x153;Our languages are still disappearing as fast as ever, but the efforts to halt this loss are as strong as ever. We are very proud that Puliima will showcase these success stories and the methods being used.â&#x20AC;? says Daryn. The William Angliss Conference Centre in Melbourne will once Page 2

again provide the venue for Puliima 2013, following on from Newcastle in 2007, Melbourne in 2009 and Brisbane in 2011. About Miromaa Aboriginal Language & Technology Centre Miromaa Language Centre was formed in 2003, since then their activities have grown to the point where they are involved in some manner with over 150 language activities around Australia, their support extends to supporting many International language activities as well. Puliima is funded through initiatives of the Federal Government and programs managed with the Office of the Arts. http://arts.gov.au/ indigenous/ils

This week Melbourne will buzz with Indigenous languages for the 4th Puliima National Indigenous Languages and Technology Forum (28-29th Augu...

This week Melbourne will buzz with Indigenous languages for the 4th Puliima National Indigenous Languages and Technology Forum (28-29th Augu...