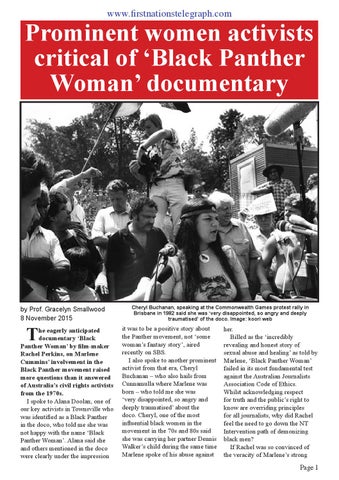 he eagerly anticipated documentary ‘Black Panther Woman’ by film-maker Rachel Perkins, on Marlene Cummins’ involvement in the Black Panther movement raised more questions than it answered of Australia’s civil rights activists from the 1970s. I spoke to Alana Doolan, one of our key activists in Townsville who was identified as a Black Panther in the doco, who told me she was not happy with the name ‘Black Panther Woman’. Alana said she and others mentioned in the doco were clearly under the impression

Cheryl Buchanan, speaking at the Commonwealth Games protest rally in Brisbane in 1982 said she was ‘very disappointed, so angry and deeply traumatised’ of the doco. Image: koori web

it was to be a positive story about the Panther movement, not ‘some woman’s fantasy story’, aired recently on SBS. I also spoke to another prominent activist from that era, Cheryl Buchanan – who also hails from Cunnamulla where Marlene was born – who told me she was ‘very disappointed, so angry and deeply traumatised’ about the doco. Cheryl, one of the most influential black women in the movement in the 70s and 80s said she was carrying her partner Dennis Walker’s child during the same time Marlene spoke of his abuse against

her. Billed as the ‘incredibly revealing and honest story of sexual abuse and healing’ as told by Marlene, ‘Black Panther Woman’ failed in its most fundamental test against the Australian Journalists Association Code of Ethics. Whilst acknowledging respect for truth and the public’s right to know are overriding principles for all journalists, why did Rachel feel the need to go down the NT Intervention path of demonizing black men? If Rachel was so convinced of the veracity of Marlene’s strong

Above: Alana Doolan said she thought the doco was to be a positive story on the Panthers, not ‘some woman’s fantasy story’. Image: sovereignunion

Marlene Cummings whose story on Black Panther abuse in Australia is the subject of critical review by prominent black women activists. Image: blackfellafilms.com.au

allegation against prominent Panther activist Denis Walker and another unidentified black man who she claimed ‘sexually abused’ her, why wasn’t the story premised on a pending court case where Marlene’s allegations could be tested? And more importantly for black men, especially Denis Walker who was the only black man named, why was he not afforded the opportunity to defend allegations against him in a court of law? I respect the body of work of Rachel’s, who, through her Blackfella Films produced and/ or directed First Contact, Redfern Now, Bran Nue Dae and Mabo. However, by graphically identifying, towards the end of the doco, the sequence of abuse by two high profile black men: one an Aboriginal who committed the sexual assault inside a building and the other a Torres Strait Islander

who stayed in the car to keep watch, without naming them has cast aspersion on all black men who were associated with the ‘movement’ in Brisbane back in that era. In particular there would not have been many Torres Strait Islander men active in the movement back then. I can only think of three – of which one is still alive today – who must now have to face the stares and innuendos of his people and importantly his family. Like the NT Intervention did with the government’s unsubstantiated allegations of large numbers of black paedophiles abusing young children in remote communities, all black men from the 60s and 70s Black Panther movement, both nationally and internationally, could be now viewed as perpetrators. The Black Panthers set the scene for all people of colour who were colonised and suffered so much genocide. I have travelled and stayed with a number of Panthers in Australia and abroad, in particular, the late brother Stokely Carmichael – also known as Kwame Turé – and not once was I sexually harassed or abused by them. It was Stokely – who died aged 57 in 1998 – who is best remembered for the phrase “black power” in mid-1960s that so incited white backlash and alarmed more conservative rights leaders like Rev. Dr. Martin Luther King Jr. I have fond memories of Stokely as we dangerously travelled by boat from Malta to Libya, after attending Steve Biko’s memorial in South Africa as a guest of Nelson Mandela in 1997. Our cause back then was all about truth, justice, and politics.

suffering on loved ones and other community members. I believe Rachel should use her considerable influence in gaining funding for future film projects by addressing issues around the Treaty and Sovereignty debates.