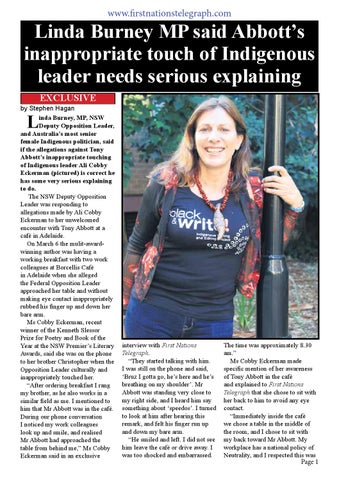 by Stephen Hagan inda Burney, MP, NSW Deputy Opposition Leader, and Australia’s most senior female Indigenous politician, said if the allegations against Tony Abbott’s inappropriate touching of Indigenous leader Ali Cobby Eckerman (pictured) is correct he has some very serious explaining to do. The NSW Deputy Opposition Leader was responding to allegations made by Ali Cobby Eckerman to her unwelcomed encounter with Tony Abbott at a café in Adelaide. On March 6 the mulit-awardwinning author was having a working breakfast with two work colleagues at Borcellis Café in Adelaide when she alleged the Federal Opposition Leader approached her table and without making eye contact inappropriately rubbed his finger up and down her bare arm. Ms Cobby Eckerman, recent winner of the Kenneth Slessor Prize for Poetry and Book of the Year at the NSW Premier’s Literary Awards, said she was on the phone to her brother Christopher when the Opposition Leader culturally and inappropriately touched her. “After ordering breakfast I rang my brother, as he also works in a similar field as me. I mentioned to him that Mr Abbott was in the café. During our phone conversation I noticed my work colleagues look up and smile, and realised Mr Abbott had approached the table from behind me,” Ms Cobby Eckerman said in an exclusive

interview with First Nations Telegraph. “They started talking with him. I was still on the phone and said, ‘Bruz I gotta go, he’s here and he’s breathing on my shoulder’. Mr Abbott was standing very close to my right side, and I heard him say something about ‘speedos’. I turned to look at him after hearing this remark, and felt his finger run up and down my bare arm. “He smiled and left. I did not see him leave the café or drive away. I was too shocked and embarrassed.

The time was approximately 8.30 am.” Ms Cobby Eckerman made specific mention of her awareness of Tony Abbott in the café and explained to First Nations Telegraph that she chose to sit with her back to him to avoid any eye contact. “Immediately inside the café we chose a table in the middle of the room, and I chose to sit with my back toward Mr Abbott. My workplace has a national policy of Neutrality, and I respected this was Page 1

no arena to interact with Mr Abbott in any way, due to the difference of our cultural, personal and political views,” Ms Cobby Eckerman said. “I wanted to concentrate on our work conversation over breakfast, and prepare for the reason that I was in the city, to attend training to gain my Child Safe Environments certificate.” First Nations Telegraph contacted Christopher Coleman Eckerman to confirm his sister’s telephone conversation prior to Tony Abbott’s encounter. “I could tell Ali was anxious at the time of our conversation when she was at Borcellis and she told me Abbott had approached her table,” Adelaide based Mr Coleman Eckerman, 52, said. “It struck home to me that night when I sat down and had a talk about it over a meal with her the real impact of his action. With what my sister has endured and overcome during her life, the last thing she wants is to be touched in a culturally unsafe manner by a man. “The fact that it was a man in Abbott’s position of authority made the incident even more serious.” Ms Cobby Eckerman said for days after the incident she felt humiliated and felt like wearing a burka. “The impact of my feelings for days after Abbott was realised, as I live alone and had time to process my thoughts. I felt unsafe alone and rang the local psychologist to make an appointment, as I felt so humiliated. I felt like wearing a burka, to ensure I would be safe in public in the future,” she said. “I mean no disrespect to women who wear burkas as part of their culture. It is just that I wanted to hide and be safe in my community today after that experience. “I cried. I rang another trusted friend for some informed advice. I realised I wanted an apology from Mr Abbott for his inappropriate behaviour.” Page 2

Kenneth Slessor Prize for Poetry at the NSW Premiers Literary Awards in Sydney. File image. Days later Ms Cobby Eckerman from your companions, although wrote to Tony Abbott asking for a no introductions were made. As I private meeting with him to explain recall, as I was moving past your why rubbing her bare arm was table and one of your companions culturally inappropriate. She said smiled at me and said something she also made specific mention along the lines of “aren’t you that she wasn’t after any financial going to talk to us?”. I stopped compensation but just an apology. briefly, spoke for a few moments Ms Cobby Eckerman mentioned and then left the restaurant. I in her email to the Opposition reject any suggestion that I acted Leader that she also wanted to meet inappropriately. That, also, is the with him in person in the hope that view of my friend. he would acknowledge and learn Ms Cobby Eckerman said she from his mistake and to appreciate was surprised at the speed of Tony culturally appropriate ways of Abbott’s response to her email and interacting with Aboriginal women to his denial. in the future. On return from her month long On March 20 Tony Abbott trip to Ireland as the Australian responded promptly to Ms Cobby Poetry Ambassador late last week Eckerman’s email by denying he Ms Cobby Eckerman said she felt inappropriately touched her. she needed to tell her version of Dear Ms Eckermann events with her uninvited contact I have read your email to my with Tony Abbott on that particular office and wish to respond. I was day on March 6 at Adelaide’s in Adelaide recently having a Borcellis Café quick breakfast with a journalist “It was only my time in Ireland friend at a local café. As I was that I could overcome the shame. paying the bill, various people I am relieved that this time away engaged me in conversation and from Australia also allowed me to eventually I stopped to talk at move through the fear (of Abbott’s your table, after an invitation inappropriate behaviour), and Christopher Coleman Eckerman, Ali’s brother, receiving her

believe this is the correct course of action for me to undertake. I do not know the future consequences that I may incur for my decision,” she said in relation to the security of her job for going public on this issue. “I need this apology for my wellbeing, and to stand up against the inappropriate and sexist behaviours that have often prevented me from achieving my full potential in the past. I will not tolerate this inappropriate behaviour on my life journey from anyone any more.” Ms Cobby Eckerman acknowledged that many women do tolerate violence and inappropriate dealings by men but it was time now for her to make a stand. “I am an Australian citizen and an Aboriginal Australian, and I would expect to be treated with respect from our political leaders.

The incident has had an impact at work, and my manager has notified me of my right to EAS counseling,” she said. “Much violence and inappropriateness is tolerated by women, and I need to stand against this tolerance, in the hope that more women will value themselves more, to change their lives. “If change, essential for Aboriginal people’s healing and welfare, cannot come from the government then it must come from Aboriginal people and Aboriginal cultural ethics. My life has been blessed by such teachings by my Elders in remote central Australia, giving me the necessary skills to survive today. “It is within my cultural beliefs that I ask for Mr Abbott’s apology.” Samantha Maiden, reporting for The Sunday Telegraph, September

16, 2012 wrote about issues of alleged inappropriate dealings of the Opposition Leader under the headline Old boy Abbott displays an adept hand at massage. Helen Elizabeth Wilson, 29, had told a North Sydney court that while addressing a student rally someone had called out: “Why don’t you smile, honey?”. A Daily Telegraph reporter said she told the court: “I had just commenced speaking when I felt a hand between my legs on my lower buttocks. I was wearing jeans. I jumped back, turned around, and saw Tony Abbott laughing.” Abbott said he simply “tapped her on the back, about the level of her jeans belt”, adding that the judge dismissed the case. Page 3

On March 6 the mulit-award-winning author was having a working breakfast with two work colleagues at Borcellis Café in Adelaide when she all...

On March 6 the mulit-award-winning author was having a working breakfast with two work colleagues at Borcellis Café in Adelaide when she all...