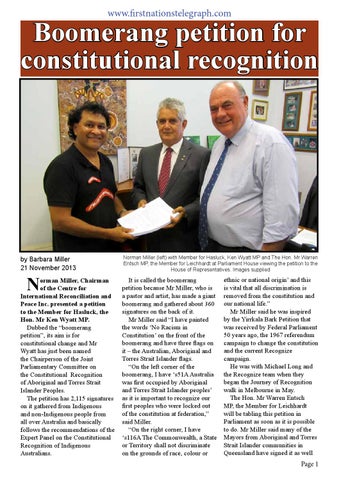 Norman Miller (left) with Member for Hasluck, Ken Wyatt MP and The Hon. Mr Warren Entsch MP, the Member for Leichhardt at Parliament House viewing the petition to the House of Representatives. Images supplied

orman Miller, Chairman of the Centre for International Reconciliation and Peace Inc. presented a petition to the Member for Hasluck, the Hon. Mr Ken Wyatt MP. Dubbed the “boomerang petition”, its aim is for constitutional change and Mr Wyatt has just been named the Chairperson of the Joint Parliamentary Committee on the Constitutional Recognition of Aboriginal and Torres Strait Islander Peoples. The petition has 2,115 signatures on it gathered from Indigenous and non-Indigenous people from all over Australia and basically follows the recommendations of the Expert Panel on the Constitutional Recognition of Indigenous Australians.

It is called the boomerang petition because Mr Miller, who is a pastor and artist, has made a giant boomerang and gathered about 360 signatures on the back of it. Mr Miller said “I have painted the words ‘No Racism in Constitution’ on the front of the boomerang and have three flags on it – the Australian, Aboriginal and Torres Strait Islander flags. “On the left corner of the boomerang, I have ‘s51A Australia was first occupied by Aboriginal and Torres Strait Islander peoples’ as it is important to recognize our first peoples who were locked out of the constitution at federation,” said Miller. “On the right corner, I have ‘s116A The Commonwealth, a State or Territory shall not discriminate on the grounds of race, colour or

ethnic or national origin’ and this is vital that all discrimination is removed from the constitution and our national life.” Mr Miller said he was inspired by the Yirrkala Bark Petition that was received by Federal Parliament 50 years ago, the 1967 referendum campaign to change the constitution and the current Recognize campaign. He was with Michael Long and the Recognize team when they began the Journey of Recognition walk in Melbourne in May. The Hon. Mr Warren Entsch MP, the Member for Leichhardt will be tabling this petition in Parliament as soon as it is possible to do. Mr Miller said many of the Mayors from Aboriginal and Torres Strait Islander communities in Queensland have signed it as well

as Australians from all walks of life. Mr Miller said the purpose of his campaign, which he will continue, is to prepare people for a yes vote in a referendum to be held on these issues in the term of the current parliament. Bipartisan support is already there which will make it easier to achieve” Mr Miller said. “My aim has been one of public education, raising community awareness and support and keeping the issue before government, bolstering its political will in this matter” he said. “While getting signatures for this petition, I have met people from all walks of life, Indigenous and nonIndigenous and found that there is little knowledge of this issue on the street and I have been able to discuss the issues and gain broad

Micky Mundine and group at The Block in Redfern, Sydney.

support. “The 1967 Referendum enabled Indigenous people to be counted in the census instead of the degrading situation of being counted with plants and animals and now we need to take the next step” Mr Miller said. “My petition to the House of Representatives says the following: ‘We therefore ask the House to: Educate the Australian nation about the need for constitutional change and hold a referendum within two years to: • Remove Section 25 – which says the States can ban people from voting based on their race; • Remove section 51(xxvi) – which can be used to pass laws that discriminate against people based on their race; • Insert a new section 51A - to recognise Aboriginal and Torres Strait Islander peoples and to preserve the Australian

Government’s ability to pass laws for the benefit of Aboriginal and Torres Strait Islander peoples; • Insert a new section 116A, banning racial discrimination by government; and • Insert a new section 127A, recognising Aboriginal and Torres Strait Islander languages were this country’s first tongues, while confirming that English is Australia’s national language.’” “I am encouraged that this nation has come to the maturity to enable it to make changes to the constitution that will benefit the whole nation,” Mr Miller said. “It will also be an act of reconciliation. I have a strong desire to see justice done and I believe that the Australian people, at core, have a belief in a fair go for all.” Mr Miller will be at Parliament House Canberra until Thursday.

Norman Miller, Chairman of the Centre for International Reconciliation and Peace Inc. presented a petition to the Member for Hasluck, the Ho...

Norman Miller, Chairman of the Centre for International Reconciliation and Peace Inc. presented a petition to the Member for Hasluck, the Ho...