A message about the reef to be read in 30 years 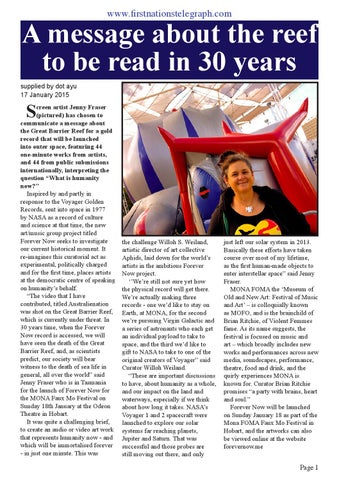 creen artist Jenny Fraser (pictured) has chosen to communicate a message about the Great Barrier Reef for a gold record that will be launched into outer space, featuring 44 one-minute works from artists, and 44 from public submissions internationally, interpreting the question “What is humanity now?’’ Inspired by and partly in response to the Voyager Golden Records, sent into space in 1977 by NASA as a record of culture and science at that time, the new art/music group project titled Forever Now seeks to investigate our current historical moment. It re-imagines this curatorial act as experimental, politically charged and for the first time, places artists at the democratic centre of speaking on humanity’s behalf. “The video that I have contributed, titled Australienation was shot on the Great Barrier Reef, which is currently under threat. In 30 years time, when the Forever Now record is accessed, we will have seen the death of the Great Barrier Reef, and, as scientists predict, our society will bear witness to the death of sea life in general, all over the world” said Jenny Fraser who is in Tasmania for the launch of Forever Now for the MONA Faux Mo Festival on Sunday 18th January at the Odeon Theatre in Hobart. It was quite a challenging brief, to create an audio or video art work that represents humanity now - and which will be immortalised forever - in just one minute. This was

the challenge Willoh S. Weiland, artistic director of art collective Aphids, laid down for the world’s artists in the ambitious Forever Now project. ‘’We’re still not sure yet how the physical record will get there. We’re actually making three records - one we’d like to stay on Earth, at MONA, for the second we’re pursuing Virgin Galactic and a series of astronauts who each get an individual payload to take to space, and the third we’d like to gift to NASA to take to one of the original creators of Voyager” said Curator Willoh Weiland. “These are important discussions to have, about humanity as a whole, and our impact on the land and waterways, especially if we think about how long it takes. NASA’s Voyager 1 and 2 spacecraft were launched to explore our solar systems far reaching planets, Jupiter and Saturn. That was successful and those probes are still moving out there, and only

just left our solar system in 2013. Basically these efforts have taken course over most of my lifetime, as the first human-made objects to enter interstellar space” said Jenny Fraser. MONA FOMA the ‘Museum of Old and New Art: Festival of Music and Art’ – is colloquially known as MOFO, and is the brainchild of Brian Ritchie, of Violent Femmes fame. As its name suggests, the festival is focused on music and art – which broadly includes new works and performances across new media, soundscapes, performance, theatre, food and drink, and the quirly experiences MONA is known for. Curator Brian Ritchie promises “a party with brains, heart and soul.” Forever Now will be launched on Sunday January 18 as part of the Mona FOMA Faux Mo Festival in Hobart, and the artworks can also be viewed online at the website forevernow.me

A message about the reef to be read in 30 years

supplied by dot ayu 17 January 2015 Screen artist Jenny Fraser (pictured) has chosen to communicate a message about the Great Barrier Reef for a gold record that will be launched into outer space, featuring 44 one-minute works from artists, and 44 from public submissions internationally, interpreting the question “What is humanity now?’’ 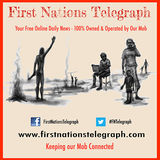