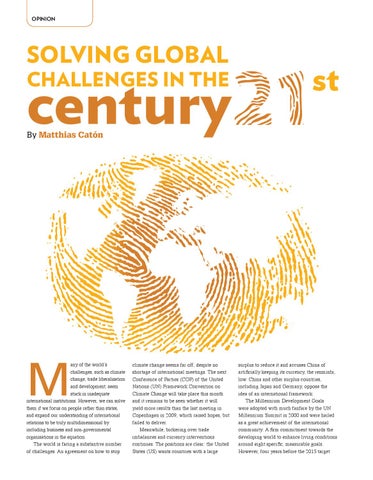 century challenges in the By Matthias Catón

any of the world’s challenges, such as climate change, trade liberalisation and development, seem stuck in inadequate international institutions. However, we can solve them if we focus on people rather than states, and expand our understanding of international relations to be truly multidimensional by including business and non-governmental organisations in the equation. The world is facing a substantive number of challenges. An agreement on how to stop

climate change seems far off, despite no shortage of international meetings. The next Conference of Parties (COP) of the United Nations (UN) Framework Convention on Climate Change will take place this month and it remains to be seen whether it will yield more results than the last meeting in Copenhagen in 2009, which raised hopes, but failed to deliver. Meanwhile, bickering over trade imbalances and currency interventions continues. The positions are clear: the United States (US) wants countries with a large

surplus to reduce it and accuses China of artificially keeping its currency, the renminbi, low. China and other surplus countries, including Japan and Germany, oppose the idea of an international framework. The Millennium Development Goals were adopted with much fanfare by the UN Millennium Summit in 2000 and were hailed as a great achievement of the international community: A firm commitment towards the developing world to enhance living conditions around eight specific, measurable goals. However, four years before the 2015 target

The Edge is a business magazine targeting ambitious professionals operating within Qatar’s multi-sector business landscape. The Edge is read by Qatar’s CEOs, top- and mid-level managers and independent business owners, and is recognised and enjoyed by business leaders and other influential figures in the Middle East and beyond. 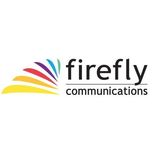