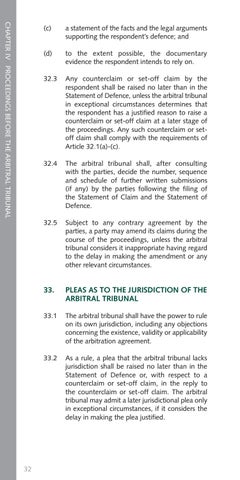 a statement of the facts and the legal arguments supporting the respondentâ&amp;#x20AC;&amp;#x2122;s defence; and

to the extent possible, the documentary evidence the respondent intends to rely on.

32.3 Any counterclaim or set-off claim by the respondent shall be raised no later than in the Statement of Defence, unless the arbitral tribunal in exceptional circumstances determines that the respondent has a justified reason to raise a counterclaim or set-off claim at a later stage of the proceedings. Any such counterclaim or setoff claim shall comply with the requirements of Article 32.1(a)-(c). 32.4 The arbitral tribunal shall, after consulting with the parties, decide the number, sequence and schedule of further written submissions (if any) by the parties following the filing of the Statement of Claim and the Statement of Defence. 32.5 Subject to any contrary agreement by the parties, a party may amend its claims during the course of the proceedings, unless the arbitral tribunal considers it inappropriate having regard to the delay in making the amendment or any other relevant circumstances.

PLEAS AS TO THE JURISDICTION OF THE ARBITRAL TRIBUNAL 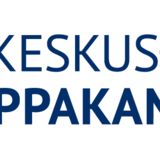