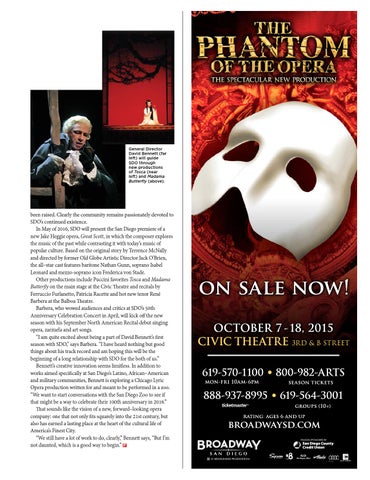 General Director David Bennett (far left) will guide SDO through new productions of Tosca (near left) and Madama Butterfly (above).

been raised. Clearly the community remains passionately devoted to SDO’s continued existence. In May of 2016, SDO will present the San Diego premiere of a new Jake Heggie opera, Great Scott, in which the composer explores the music of the past while contrasting it with today’s music of popular culture. Based on the original story by Terrence McNally and directed by former Old Globe Artistic Director Jack O’Brien, the all–star cast features baritone Nathan Gunn, soprano Isabel Leonard and mezzo-soprano icon Frederica von Stade. Other productions include Puccini favorites Tosca and Madama Butterfly on the main stage at the Civic Theatre and recitals by Ferruccio Furlanetto, Patricia Racette and hot new tenor René Barbera at the Balboa Theatre. Barbera, who wowed audiences and critics at SDO’s 50th Anniversary Celebration Concert in April, will kick off the new season with his September North American Recital debut singing opera, zarzuela and art songs. “I am quite excited about being a part of David Bennett’s first season with SDO,” says Barbera. “I have heard nothing but good things about his track record and am hoping this will be the beginning of a long relationship with SDO for the both of us.” Bennett’s creative innovation seems limitless. In addition to works aimed specifically at San Diego’s Latino, African–American and military communities, Bennett is exploring a Chicago Lyric Opera production written for and meant to be performed in a zoo. “We want to start conversations with the San Diego Zoo to see if that might be a way to celebrate their 100th anniversary in 2016.” That sounds like the vision of a new, forward–looking opera company: one that not only fits squarely into the 21st century, but also has earned a lasting place at the heart of the cultural life of America’s Finest City. “We still have a lot of work to do, clearly,” Bennett says, “But I’m not daunted, which is a good way to begin.”

Crisper mornings. The familiar chug of school buses. Fresh, fashionable wardrobes. It’s September! Back to school means two things: a return to higher learning and new clothes! This issue is about the finest in both: from educators, like local Professor Ralph Müller, who are changing the way we learn, to iconic fall looks from designers like celeb–favorite Marchesa. Here at FINE Magazine, we value nothing more than education—but we want to make sure you look good while you’re hitting the books, too! Our pages are absolutely bursting with fresh fall finds and in–depth looks at local game–changers. September is always a whirlwind of new, exciting adventures, and we hope we can help guide you every step of the way! 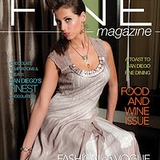