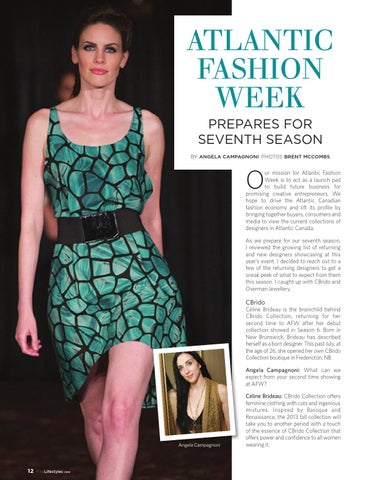 ur mission for Atlantic Fashion Week is to act as a launch pad to build future business for promising creative entrepreneurs. We hope to drive the Atlantic Canadian fashion economy and lift its profile by bringing together buyers, consumers and media to view the current collections of designers in Atlantic Canada. As we prepare for our seventh season, I reviewed the growing list of returning and new designers showcasing at this year’s event. I decided to reach out to a few of the returning designers to get a sneak peek of what to expect from them this season. I caught up with CBrido and Overman Jewellery.

CBrido Céline Brideau is the brainchild behind CBrido Collection, returning for her second time to AFW after her debut collection showed in Season 6. Born in New Brunswick, Brideau has described herself as a born designer. This past July, at the age of 26, she opened her own CBrido Collection boutique in Fredericton, NB. Angela Campagnoni: What can we expect from your second time showing at AFW?

Céline Brideau: CBrido Collection offers feminine clothing with cuts and ingenious mixtures. Inspired by Baroque and Renaissance, the 2013 fall collection will take you to another period with a touch of the essence of CBrido Collection that offers power and confidence to all women wearing it.