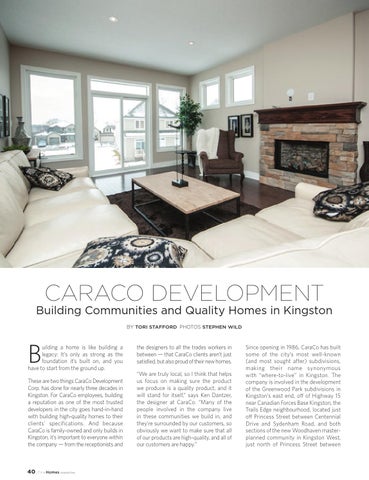 uilding a home is like building a legacy: It’s only as strong as the foundation it’s built on, and you have to start from the ground up. These are two things CaraCo Development Corp. has done for nearly three decades in Kingston. For CaraCo employees, building a reputation as one of the most trusted developers in the city goes hand-in-hand with building high-quality homes to their clients’ specifications. And because CaraCo is family-owned and only builds in Kingston, it’s important to everyone within the company — from the receptionists and

the designers to all the trades workers in between — that CaraCo clients aren’t just satisfied, but also proud of their new homes. “We are truly local, so I think that helps us focus on making sure the product we produce is a quality product, and it will stand for itself,” says Ken Dantzer, the designer at CaraCo. “Many of the people involved in the company live in these communities we build in, and they’re surrounded by our customers, so obviously we want to make sure that all of our products are high-quality, and all of our customers are happy.”

Since opening in 1986, CaraCo has built some of the city’s most well-known (and most sought after) subdivisions, making their name synonymous with “where-to-live” in Kingston. The company is involved in the development of the Greenwood Park subdivisions in Kingston’s east end, off of Highway 15 near Canadian Forces Base Kingston, the Trails Edge neighbourhood, located just off Princess Street between Centennial Drive and Sydenham Road, and both sections of the new Woodhaven masterplanned community in Kingston West, just north of Princess Street between