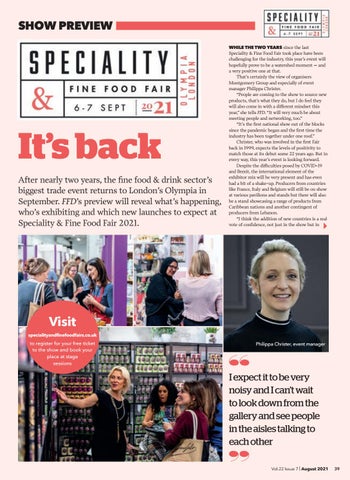 WHILE THE TWO YEARS since the last Speciality & Fine Food Fair took place have been challenging for the industry, this year’s event will hopefully prove to be a watershed moment – and a very positive one at that. That’s certainly the view of organisers Montgomery Group and especially of event manager Philippa Christer. “People are coming to the show to source new products, that’s what they do, but I do feel they will also come in with a different mindset this year,” she tells FFD. “It will very much be about meeting people and networking, too.” “It’s the first national show out of the blocks since the pandemic began and the first time the industry has been together under one roof.” Christer, who was involved in the first Fair back in 1999, expects the levels of positivity to match those at its debut some 22 years ago. But in every way, this year’s event is looking forward. Despite the difficulties posed by COVID-19 and Brexit, the international element of the exhibitor mix will be very present and has even had a bit of a shake-up. Producers from countries like France, Italy and Belgium will still be on show at various pavilions and stands but there will also be a stand showcasing a range of products from Caribbean nations and another contingent of producers from Lebanon. “I think the addition of new countries is a real vote of confidence, not just in the show but in

I expect it to be very noisy and I can’t wait to look down from the gallery and see people in the aisles talking to each other Vol.22 Issue 7 | August 2021