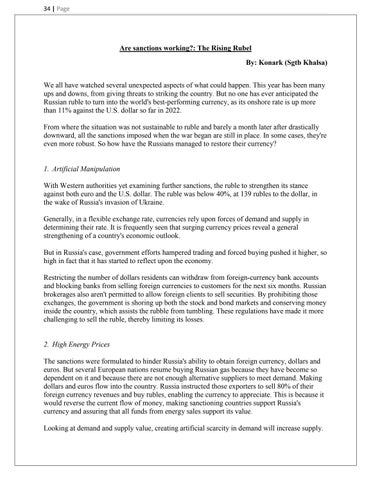 Are sanctions working?: The Rising Rubel By: Konark (Sgtb Khalsa) We all have watched several unexpected aspects of what could happen. This year has been many ups and downs, from giving threats to striking the country. But no one has ever anticipated the Russian ruble to turn into the world&#39;s best-performing currency, as its onshore rate is up more than 11% against the U.S. dollar so far in 2022. From where the situation was not sustainable to ruble and barely a month later after drastically downward, all the sanctions imposed when the war began are still in place. In some cases, they&#39;re even more robust. So how have the Russians managed to restore their currency?

1. Artificial Manipulation With Western authorities yet examining further sanctions, the ruble to strengthen its stance against both euro and the U.S. dollar. The ruble was below 40%, at 139 rubles to the dollar, in the wake of Russia&#39;s invasion of Ukraine. Generally, in a flexible exchange rate, currencies rely upon forces of demand and supply in determining their rate. It is frequently seen that surging currency prices reveal a general strengthening of a country&#39;s economic outlook. But in Russia&#39;s case, government efforts hampered trading and forced buying pushed it higher, so high in fact that it has started to reflect upon the economy. Restricting the number of dollars residents can withdraw from foreign-currency bank accounts and blocking banks from selling foreign currencies to customers for the next six months. Russian brokerages also aren&#39;t permitted to allow foreign clients to sell securities. By prohibiting those exchanges, the government is shoring up both the stock and bond markets and conserving money inside the country, which assists the rubble from tumbling. These regulations have made it more challenging to sell the ruble, thereby limiting its losses.

2. High Energy Prices The sanctions were formulated to hinder Russia&#39;s ability to obtain foreign currency, dollars and euros. But several European nations resume buying Russian gas because they have become so dependent on it and because there are not enough alternative suppliers to meet demand. Making dollars and euros flow into the country. Russia instructed those exporters to sell 80% of their foreign currency revenues and buy rubles, enabling the currency to appreciate. This is because it would reverse the current flow of money, making sanctioning countries support Russia&#39;s currency and assuring that all funds from energy sales support its value. Looking at demand and supply value, creating artificial scarcity in demand will increase supply. 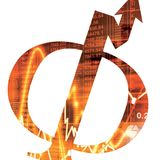