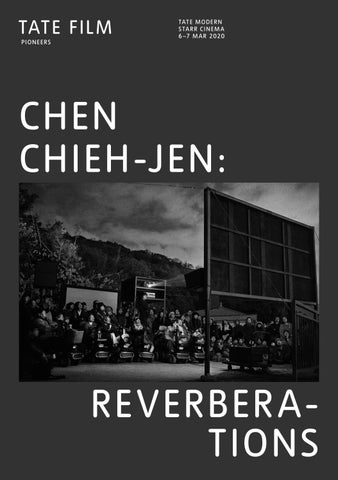 CHEN CHIEH -JEN: RE VERBER ATIONS Daring and poetic in equal measure, the works of Chen Chieh-jen cultivate critical reflections on structures of power, state violence and neoliberalism through his lived experiences in and with numerous marginalised communities. The artist’s striking works are characterised by arresting uses of black-and-white cinematography, slow-motion and elliptical dialogue. They often feature re-enactments and adopt restrained theatrical and sculptural approaches to the stories and sites represented. This two-day series is a tailored survey of Chen’s moving image works, which collectively point toward his efforts to recuperate voices from a horizon of historical amnesia. Chen began his career as an artist in the 1980s, a period marked by the Cold War, and in which martial law remained in effect in Taiwan. Challenging authoritarian restraints on freedom of expression, he engaged in guerrilla art actions and underground exhibitions. After the lifting of martial law in 1987, Chen gradually ceased making art, returning only in 1996, when he began a new approach grounded in collaborations with those most affected by Taiwan’s newly adopted neoliberalism. To this day, he approaches each project as an opportunity to form a temporary community with those whose stories he seeks to surface, from local residents to unemployed labourers, migrant workers and social activists. Together they occupy abandoned factories and other cordoned-off sites and make use of discarded materials to create sets for their productions.

Each of Chen’s works are attuned to the specific sociopolitical circumstances that marginalise the communities with whom he collaborates, whether these are relayed directly or indirectly. He emphasises the need for reimagining, re-narrating, rewriting and reconnecting histories as a key tactic within his approach, stating that, ‘Taiwan’s historical and political situation of longterm domination and placement under the overlapping sovereignty of different nations has resulted in the complete disintegration of the people’s spirit. Taiwanese society has been repeatedly forced to become one with historical amnesia and has lost the ability to imagine and reflect on the future from the context of past.’ Chen’s focus on giving form to real and imagined, perceptual and bodily experiences alike has built an artistic oeuvre that strives to tell a people’s history of Taiwan, with its gaps, dialectics and construction placed squarely in the foreground. This Pioneers series offers a rare opportunity to create links between the works’ disparate events and historical horizons, and to gain insight into the artist’s rich, compelling and socially-engaged body of work.

FAC TORY AND THE ROUTE

This programme pairs two of the artist’s most striking political short films. These films use re-enactment and revisionism to revisit histories of labour struggles.

Taiwan 2003, Super 16 mm transferred to digital video, colour, silent, 31 min Factory captures a group of women workers re-enacting their duties in an abandoned garment factory where they had formerly been employed. The work was made after many industries were moved abroad to reduce personnel costs and workers were laid off unlawfully, without severance or pension payments. Intercut with clips appropriated from propaganda ads, Factory scrutinises the expressions and gestures of the women as they work, as well as the sculptural assemblies of dusty tables, chairs and other objects lingering in the space.

Taiwan 2006, digital video, black and white, silent, 17 min From 1995 to 1998, a dispute between Liverpool dockers and their employer Mersey Docks and Harbour Company (MDHC) disrupted the local sea-trade. The dockers refused to cross a picket line in support of colleagues who were laid off without proper cause, leaving the Neptune Jade, a Mersey ship, unloaded. A campaign of global solidarity mounted, and the cargo-laden ship was blacklisted for two years before the dockers of Kaohsiung, Taiwan, who knew nothing of the campaign, came to its rescue. Inspired by this historical incident, The Route stages a fictional strike action in which dockers of the Kaohsiung Port formed a picket line in solidarity with the network of other ports that supported the MDHC employees.

In this special masterclass, Chen Chieh-jen unpicks numerous aspects of his idiosyncratic practice. He will discuss his research and production processes, and the forms of collaboration he builds with the communities with which he works. The talk will also look at the artist’s approach to multi-media installation, including a presentation of his 2008-9 single-channel video installation Empire’s Borders I and clips of multi-channel works.

Taiwan 2008–9, 35 mm transferred to digital video, colour and black and white, sound, 27 min, Mandarin with English subtitles Empire’s Borders I draws upon the artist’s personal experience of being refused a US visa. Divided into two segments, the film presents cases of abuse and discrimination by the officers of the American Institute in Taiwan towards Taiwanese applicants, and by Taiwan’s National Immigration Agency toward Chinese spouses of Taiwanese citizens. Chen juxtaposes these two situations to explore the global hierarchies of border control policies. By rendering the interview rooms of these two institutions visible and audible, he attempts to subvert the government’s efforts to conceal these procedures.

The series concludes with two short works made in collaboration with the community living in Taipei’s Losheng Sanatorium. This pairing of works exemplifies the artist’s socially-engaged approach to video. Each takes a different approach to representing the lives of its residents, and Chen’s engagements with them.

Realm of Reverberations takes us into the remains of Taipei’s Losheng Sanatorium, a facility established by the colonial government of Japan in the 1930s to house and quarantine people with leprosy. At the point of filming, seventy per cent of the premises had been demolished for the development of a public transit depot. In this work, Chen presents the perspectives of several individuals living and working within the sanatorium: ageing residents, a young caretaker, a Chinese hospice nurse and a fictional political prisoner who travels through the history of Taiwan from the Japanese colonial period to the present. Through these perspectives, Chen explores possible points of intersection, and the lingering effects of a past which is perhaps much less settled than it may appear. Realm of Reverberations was first conceived as a four-channel video installation.

In 2015, Chen Chieh-jen returned to Losheng Sanatorium for a screening of Realm of Reverberations, which was organised in the style of a temple festival parade. Wind Songs is a reenactment of what had been captured in the documentation of the ceremony, paying close attention to details such as the facial expressions of audience members. The work explores the impossibility of faithfully representing the bodily experiences, perceptions and memories of either a social movement or a ceremony, and instead offers an imaginary shaped by these largely overlooked and seemingly ineffable moments and states. Wind Songs was first conceived as a single-channel video installation.