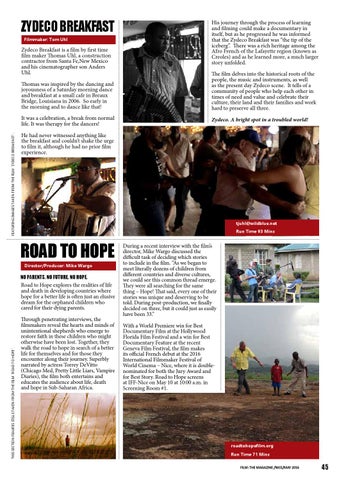 Zydeco Breakfast is a film by first time film maker Thomas Uhl, a construction contractor from Santa Fe,New Mexico and his cinematographer son Anders Uhl. Thomas was inspired by the dancing and joyousness of a Saturday morning dance and breakfast at a small cafe in Breaux Bridge, Louisiana in 2006. So early in the morning and to dance like that!

It was a celebration, a break from normal life. It was therapy for the dancers!

The film delves into the historical roots of the people, the music and instruments, as well as the present day Zydeco scene. It tells of a community of people who help each other in times of need and value and celebrate their culture, their land and their families and work hard to preserve all three. Zydeco. A bright spot in a troubled world!

He had never witnessed anything like the breakfast and couldn’t shake the urge to film it, although he had no prior film experience.

NO PARENTS. NO FUTURE. NO HOPE.

Road to Hope explores the realities of life and death in developing countries where hope for a better life is often just an elusive dream for the orphaned children who cared for their dying parents.

THIS SECTION FEAURES STILLS TAKEN FROM THE FILM “ROAD TO HOPE”.

His journey through the process of learning and filming could make a documentary in itself, but as he progressed he was informed that the Zydeco Breakfast was “the tip of the iceberg”. There was a rich heritage among the Afro French of the Lafayette region (known as Creoles) and as he learned more, a much larger story unfolded.

Through penetrating interviews, the filmmakers reveal the hearts and minds of unintentional shepherds who emerge to restore faith in these children who might otherwise have been lost. Together, they walk the road to hope in search of a better life for themselves and for those they encounter along their journey. Superbly narrated by actress Torrey DeVitto (Chicago Med, Pretty Little Liars, Vampire Diaries), the film both entertains and educates the audience about life, death and hope in Sub-Saharan Africa.

During a recent interview with the film’s director, Mike Wargo discussed the difficult task of deciding which stories to include in the film. “As we began to meet literally dozens of children from different countries and diverse cultures, we could see this common thread emerge. They were all searching for the same thing – Hope! That said, every one of their stories was unique and deserving to be told. During post-production, we finally decided on three, but it could just as easily have been 33.” With a World Premiere win for Best Documentary Film at the Hollywood Florida Film Festival and a win for Best Documentary Feature at the recent Geneva Film Festival, the film makes its official French debut at the 2016 International Filmmaker Festival of World Cinema – Nice, where it is doublenominated for both the Jury Award and for Best Story. Road to Hope screens at IFF-Nice on May 10 at 10:00 a.m. in Screening Room #1.

The 6th edition of Film The Magazine, published in conjunction with the International Filmmaker of World Cinema Nice 2016. 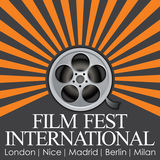