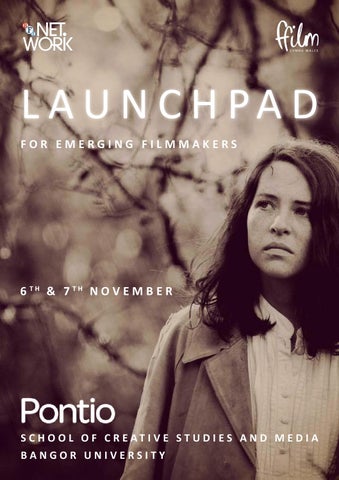 FFILM CYMRU WALES Established in 2006 and formerly known as the Film Agency for Wales, Ffilm Cymru Wales has a remit to help to develop a film sector in Wales and maximise the economic, educational and cultural benefits of film. Ffilm Cymru Wales supports Welsh or Wales-based writers, directors and producers with development and production funding, industry assistance and mentoring opportunities. We aim to bring film makers and audiences together by encouraging more people to see more films in more venues. We also promote the use of film in education and community regeneration, producing educational resources in conjunction with teachers to aid literacy and general learning.

C ecile E meke Cecile Emeke is a filmmaker from London, most known for her online docuseries Strolling and her short film turned series Ackee & Saltfish. Her work has been featured everywhere from The New York Times to The Tribeca Film Festival, and she is currently developing her Ackee & Saltfish series with the BBC.

TINA GHARAVI Born in Tehran, Gharavi is a Sundance/BAFTA-nominated screenwriter/director initially trained as a painter in the US later studying cinema in France. Fearless in her approach to storytelling, Gharavi is noted for innovative cross-platform work, often about outsiders, rebels and misfits. Sir Ben Kingsley commenting on her BAFTA-nominated feature, I Am Nasrine, it “a life enhancing film... An important and much needed film” while Peter Bradshaw (The Guardian) gave it 4 stars. Movie Scope magazine, named her one to watch and she has a development deal for her next movie, The Good Iranian, via Film4/BFI, a tale set in France and Iran, as well as a feature documentary about the US prison system and it’s link to slavery. Gharavi resides in the North of England and Paris and is an associate professor of filmmaking at Newcastle University, lectures worldwide and recently made her first after-dinner speech. She often dreams of beekeeping in Iran. Gharavi is represented by Roxana Adle at Independent Talent Group.

SPEAKERS DEWI GREGORY Dewi Gregory is a documentary film producer. His first feature film as producer is Orion: The Man Who Would Be King and he currently has a slate of feature documentaries in various stages of development and production. He started his career as a researcher for arts programmes at BBC Cymru Wales in the 90’s and has been working as a producer and director in TV in London and Cardiff since then. His production company Truth Department also produces TV programmes, art projects and has published books.

M AT K I R K B Y Mat Kirkby won the 2015 Academy Award for Best Short Film for The Phone Call, starring Sally Hawkins and Jim Broadbent, which he directed, produced and co-wrote. He grew up near Mold in North Wales and has spent the last 15 years making music videos and commercials at Ridley Scott Associates in London. His music video canon include award-winning clips for Adele, Basement Jaxx, Jamiroquai and Muse. His music videos have received over 100 million hits on Youtube. He also set the Guiness World Record for ‘Most Consecutive Bikini Waxes’ for his Fatboy Slim music video ‘Bushes’. He spends most of his time writing screenplays and eating cake.

SPEAKERS IVANA MaCKINNON Joining Celador Films in 2002, Ivana was in charge of development for seven years, and was Associate Producer on The Descent, Eden Lake and Slumdog Millionaire. In 2008 Ivana produced two features, The Descent 2 (released by Pathe in the UK and Lionsgate in the US); and The Scouting Book for Boys, which won ‘Best Newcomer’ at the London Film Festival, and was released in the UK in 2010. Joining Cloud Eight as Head of Creative Affairs in 2009, Ivana served as Associate Producer on Neil Marshall’s Centurion. In March 2011, Ivana left C8 to set up Stray Bear Productions. In 2012 Ivana Executive Produced five shorts for C4’s Random Acts, and produced Kibwe Tavares’ Jonah, a hugely ambitious live action/VFX short shot in Zanzibar, which premiered at Sundance 2013 and has won multiple international awards as well as being nominated for a BIFA. In summer 2013 Ivana Exec Produced War Book, a Jack Thorne-penned and Tom Harper-helmed political thriller starring Sophie Okenedo and Antony Sher. Stray Bear Productions received a BFI Vision Award in 2013 and we are developing a slate of film projects, focussing on unique voices and female-led stories. In April 2016 we will commence production on Beast, Michael Pearce’s debut feature, backed by BFI/Film4. Ivana is also a freelance script consultant and mentor for, among others, Screen Yorkshire, Archer’s Mark, EIFF and NFM, whose board she also sits on.

AL MORROW Al is an award-winning producer and Head of Documentary at Met Film Production. Her most recent feature documentary How To Change The World (Sky, BFI, Impact Partners, Netflix) directed by Jerry Rothwell premiered at the Sundance Film Festival in 2015 and won the World Jury Editing Award. How To Change The World was released theatrically in the UK and US through Picture House entertainment, in Australia through Madman and in Germany through NFP. Al’s producing credits include Jeanie Finlay’s Pantomime (BBC Storyville); The Great Hip Hop Hoax (BBC, Creative Scotland, BBC Scotland) which premiered at SXSW and was nominated for a 2014 Grierson and 2013 BIFA Award; BAFTA winner Sarah Gavron’s Village At The End of The World which premiered at the BFI London Film Festival 2012; Jerry Rothwell’s critically acclaimed theatrical documentary Town of Runners (Britdoc C4 Film Fund, PBS, Arte) which premiered at Tribeca FF; the Grierson Nominated Films Donor Unknown (Arte, More 4, VPRO) winner of the Tribeca (online) Audience Award and Sync or Swim aka Men Who Swim (BBC, ZDF/Arte, VPRO, SVT, PBS); Deep Water (Pathe, UKFC, FilmFour, IFC) directed by Jerry Rothwell and Louise Osmond, winner of the Grierson Award for Best Cinema Documentary and Best Documentary at Rome Film Festival; and Jerry Rothwell’s Heavy Load (BBC Storyville, IFCtv, ITVS). Al is in production on Sour Grapes directed by Jerry Rothwell and Reuben Atlas for Netflix and Arte.

SPEAKERS E D U A R D O PA N I Z Z O Eduardo Panizzo is the co-founder of Coffee & Cigarettes, a unique company acting as a producersâ&#x20AC;&#x2122; rep, a boutique marketing and distribution consultancy as well as being a full service creative design agency offering all the creative services required to fully deliver and release a title. A core aim when setting up the company was to help producers find the best route to market for their films, whether that is by packaging and brokering the best distribution and sales deals available in the marketplace, or by offering producers the means to self distribute their titles themselves.

TRACY SPOTtISWOODE Tracy oversees Talent Development for the BFI NET.WORK and joined Ffilm Cymru Wales in 2010 having established a career as an award-winning writer, director and animator, as well as professional script editing and creative writing consultancies. Her theatre work has toured internationally and she has had numerous plays broadcast on R4 & RWales. Screen work includes commissions from BBC Films, S4C and indies such as Fiction Factory and Red Planet. Her animations picked up Gold in Chicago, First in BAF, plus 3 BAFTA Cymru & 2 Celtic Film Festival awards. Tracy continues to develop her own projects and is passionate about identifying and nurturing Welsh film making talent in both languages.